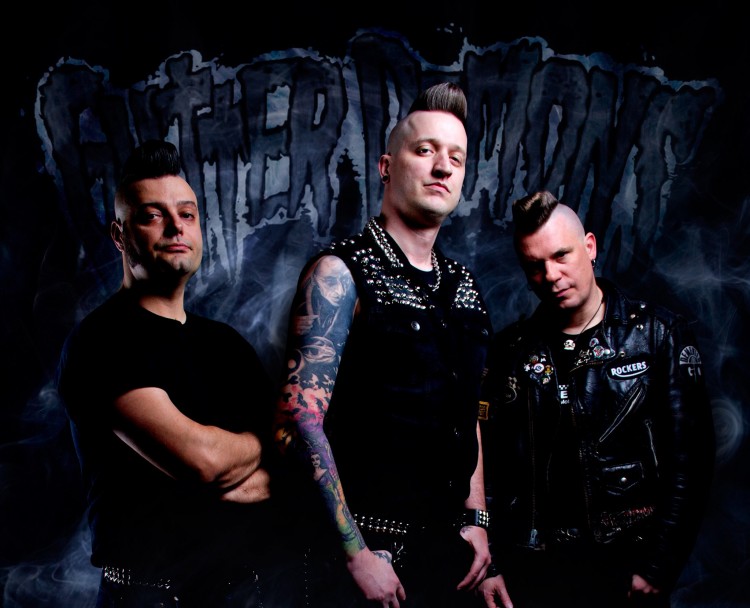 In many ways, touring is what it takes for a band to expand its appeal, hone its craft and become (usually) a tighter knit unit. Unfortunately, sometimes touring is required when the cold slap of winter is perpetually back-handing the planet.

With that in mind, Riffyou.com is asking a bunch of musicians what it’s really like traveling the frigid roads and coming out the other side.

Today,  Johnny Töxik of Montreal Psychobilly band, The Gutter Demons, tells us about how his band handles the chilly climate.

RY: What vehicle do you use when touring and how does it handle cold weather touring?

Johnny: “Ford E-350 Econoline had been our main vehicle for years until we sold it – I don’t remember exactly who needed to be bailed out back then. It’s the best for winter season in my opinion compared to Volks-hippie-wagon. Always starts after the second try, big bumpers at the front and back and enough room for a bunk bed. Very warm too. Unless the radiator cracks on your way back from Halifax in February.”

Johnny: “We drove through a pretty intense snowstorm once. Roadblocks, sliding cars and everything! Between Saguenay and Quebec City… In June!”

Johnny: “Not much in our case, since we don’t sleep.”

Johnny: “I hung out with Wet Windstorm in Winnipeg, but I’m not gonna talk about it. Freezing rain can be pretty scary. No matter how heavy the van is, when you have to stop at a red light… well… you don’t!”

Johnny: “Parka. Hands down. But not the fancy ones that cost more than 3 months of rent in Toronto. Ones from the army store, especially the Canadian Army’s. Those are really warm and have lots of pockets. You have to buy one size bigger so it covers most of your legs and you can wear a big sweater under it. Winter boots would be close second. They don’t look very cool but this is not high school anymore – wearing sneakers in winter is just plain stupid.”

Johnny: “Reggae. Reminds me of Switzerland.”

Johnny: “After for sure. when you sweat a lot during a show like we do, the cold goes straight to your bones. So loading out goes pretty fast.”

Johnny: “That’s a tough one. Never considered retiring because of the cold…and trust me, we’ve frozen our asses off more than once. To be honest, strange things cross my mind pretty much all the time. I have no excuse.”

Johnny: “You get very close knit as a band (see what I did there?!) Winter is a big (and long) part of living in our country and it’s also a big part of who we are. We are tough motherfuckers! You know that when people are crazy enough to go out when it’s -40c to see a band crazy enough to drive all the way to their city, you can’t go wrong!

“And that’s more than enough to keep us warm.”

Previous: PUP Cancel Shows Due to Health Issues
Next: Metallica Give Glimpse of “Master of Puppets” History Book