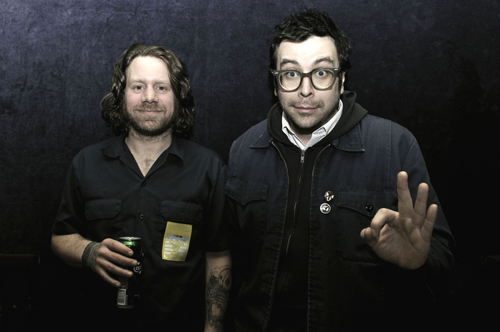 From the Hotel Plateau in Montreal, Drag the River’s Jon Snodgrass (right) is enjoying the final stages of a day off, but remains rather uncomfortable about the cold winter air that’s been filling the environment. Fortunately for this long-time Colorado-based alt-country outfit, their 2013 tour schedule is nearing an end, and some time out of the van and into cozy homes is awaiting them.

Drag the River is set to play Hamilton, ON’s, Club Absinthe on Sunday, December 15, where they’ll likely showcase a bunch of material from their 2013, Self-Titled release.

Over time, the band has been known for releasing new material just about every year since 2000’s Hobo’s Demos. However, the guys took a different approach this time around, by having a three year gap between recordings.

This week, RiffYou.com received some deeper insight into the band’s process from Snodgrass, as well as how fatherhood has changed him.

RY: You guys do a ton of recording. When you do your albums, do you go into the studio with the same strategy or make a point of just seeing what happens?

Jon: “It’s more the latter. Sometimes you’ll have an idea about [a song]…it may sound lazy, but I take the path of least resistance. I like things to do what they’re supposed to do.”

RY: With that in mind, is it a constant challenge to put out something different?

Jon: “I don’t finish things anymore, I let them finish themselves. I’m not trying to re-invent the wheel. I could, and if you wanted to know what it sounds like on mars, I could make some music that sounds like that for you. It’s really not hard for me. It’s actually more challenging for me to write straight music. Some of the guys were talking about that [the other day] – I used to have to put a key change in every song, but I don’t do that anymore because I don’t need to. I did that in my band Armchair Martian all of the time. I called it ‘Adult Contemporary Steely Dan Punk Rock,’” [laughs].

RY: So that stuff wouldn’t fit with the band right now?

Jon: “When Drag The River started, there were five people in the band and I wanted the songs to be simple enough that you could learn them by the second time the verse came around. Seriously,that was my philosophy.”

RY: How long would it have taken the guys that really complicated stuff you mentioned?

Jon: “The time it would’ve taken to learn some of those songs would’ve been never,” [laughs]. 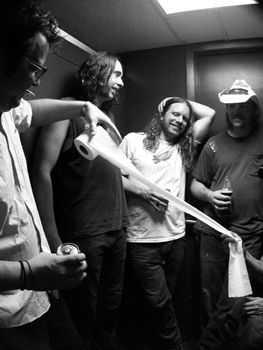 RY: We’ve already touched on the large amount of material you have, but I was curious if you were afraid that some of that stuff gets lost in the shuffle?

Jon: “We’ve reeled it back a bit. We took three years to get this album out. It was decided that we didn’t need to put something out every year. I used to like that idea and I used to feel lazy if I wasn’t doing it. That’s why I liked the way we recorded this album. We went into the studio and recorded whenever we felt like it. There were certain songs that probably wouldn’t have made the album [had they been rushed]. You’d think they were pretty good, then you’d hear them later and one of us would want to give it another shot. We didn’t have any kind of deadline. I thought it would take six months, but it took about a year. I don’t know if Metallica actually sits in a studio every day for a year. We definitely didn’t. We were probably there 9-12 days,” [laughs]

RY: You’re known for heavy touring. How many shows a year are you doing nowadays?

RY: Does life ever get in the way of playing that many shows?

RY: How do you balance it out?

Jon: “I have a family, my wife and I just had a daughter about two years ago – that’s my only concern. I want to spend as much time with them as I can.”

RY: How has fatherhood changed how you go about your music?

Jon: “In the first three months, all of the songs were really quiet. I had a little shed where I smoked cigarettes and played music all of the time, and I don’t do that anymore. I have to try and be healthier.

RY: Was there a rush of songs that came from the time you found out you were having a baby, to when she was born?

Jon: “Yeah, there was that. For example, there was this silly melody I had written and the day our daughter was born – she came three weeks early and I was flying out two days later – and pretty much wrote the song while freaking out in the shower. I wrote everything onto a brown paper bag that I bought her first little [gift] in and I haven’t released that song yet. Then there are four other songs that I use to try and put her to sleep.”

RY: Is having a daughter going to change your career priorities?

Jon: “I have to be honest – this is what I love to do and I can do it for short amounts of time. Kind of like doing teacher’s hours backwards…working three months a year. In February, I think I have it figured out pretty well. I’m on the road for 10 days, then home for three, gone for 11 more days, then home for four days. So, those are really long weeks, but sometimes I’m home for two months. I’m going to keep feeling it out…but, I think there’s going to be some heavy work coming up. It makes me sad. I don’t know if the Skype thing is better or worse. It’s really hard to hang up. My wife plays music that I’ve made to [my daughter] when I’m gone and she knows it’s me. I have to say that the way she says some things is pretty cute. Shit…this interview is going to take a turn…”

RY: I’ll throw the stop sign up on it then…