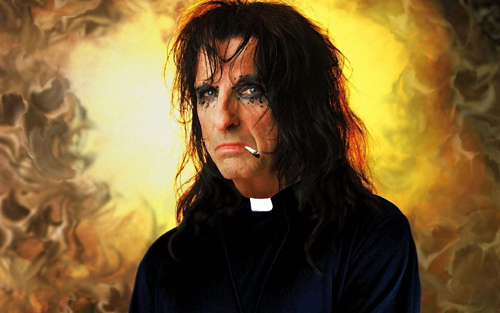 In 2006, shock-rock giant Alice Cooper was touring through Canada and hitting one of the mid-level markets that just so happened to be one that I covered on a weekly basis. After many weeks; many emails; and many anxious nights, confirmation came through that Cooper would be calling my home for a chat.

Out of all of the interviews I have ever done, it’s hard to recall many that I was more nervous to do than this one. I don’t know if it was because of Cooper’s makeup, or the fact that he used to scare me as a young music video-watching child, but I was freaked out going into this call.

Once on the line, Cooper proved to be the furthest thing from scary: he was a kind man with a beautiful artistic mind. Here’s an excerpt from our conversation where Cooper discusses his stage persona and shock value.

AG: I’ve always been curious about the Alice character coming to life. At what moment do you, Vincent, go away and Alice comes to be?

Alice: “You know, I have no reason to be Alice unless there’s an audience. The only two times I really need to be Alice is that second my foot hits that stage and the audience sees Alice – I immediately become Alice. That’s when my attitude changes, my posture changes, my sense of humour changes. Since Alice has been sober, Alice has become less of a social whipping boy like he used to be when he was drinking, and now Alice is much more consummate villain.

AG: It’s interesting that you mention the humour in the Alice character yet people where so scared of him in the beginning.

Alice: “It was a whole different time – a whole different headspace for the audience. In the late ‘60s and the ‘70s everybody was ‘peace and love,’ and ‘isn’t everything so groovy?’ and ‘let’s get together and smoke pot and look at the clouds.’ And Alice Cooper’s was A Clockwork Orange. I mean we were pre-A Clockwork Orange and I didn’t mind a little violence on stage. I didn’t mind a little bloodshed as long as it was totally entertaining at the same time it’s set to music.

“My whole creed on this whole thing is that you have to have the cake before you put the icing on it. If you divide it up like a pie, 80% of our time is spent on the music. We really want the band to be one of the tightest band’s you’ve ever heard. When you hear 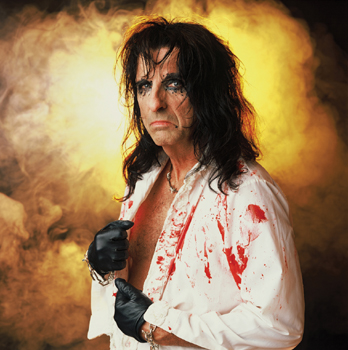 “I tell young bands that all the time with all the attitude and all the look and all the theatrics that they do, ‘Look guys, first of all, be a great band. Be a great live band. Be as good as Foo Fighters.’ You better be good, or people are going to look at you like a puppet show.

“People are shocked when they hear that 80% of our time is spent on the music – the theatrics come very easy to me. It’s very easy for me to put the theatrics together and make it work.”

AG: Where do those ideas come from?

“Well, it’s a machine gun, it’s a prop, it’s something that he swings at the audience – a crutch could do a lot of things. But, it’s also such a funny juxtaposition of a guy saying ‘I’m Eighteen’ and he’s leaning on a crutch. To me, I think all of those things go into what happens on stage.”

AG: Is it still possible to shock fans anymore or is it even the goal anymore?

Alice: “No, I don’t think it is. Unless somebody’s just so naïve that it’s unbelievable. The one thing that Marilyn Manson and I both agree on is that we can’t shock an audience.  When my fantasy, when KISS’s fantasy, when Marilyn Manson’s or any of these theatrical bands’ is not as powerful as reality, then it can’t be shocking.

“When you turn on CNN and you see a guy getting his head cut off by a terrorist, that’s shocking – that shocks me. So, me getting my head cut off in a guillotine is obviously a trick (and) not really shocking – but it was in ‘70s because we didn’t have CNN back then. Right now, we are so information loaded. I mean something happens in a riot and we’re seeing it immediately on television and you see things that are really, truly shocking. I think our job is to entertain the audience.”

AG: What is the best moment you’ve had on stage?

Alice: Oh man, there’s so many. A lot of the times your best things that happen are things that are accidents. You’re onstage and you have all of this choreography all set up and it took months to rehearse. You do that thing and you realize you get a good reaction for it, but then something totally unexpected happens and the audience goes crazy.

“You sit there and go, ‘whatever that was, we’re keeping it in the show.’ I have this rapier duelling sword that I use all of the time and I would be looking on the left side and somebody throws this doll with the make up on it and I just catch it out of the corner of my eye. It’s flying up towards the stage and without even looking, I put my sword out and it sticks on the end of the sword. Those 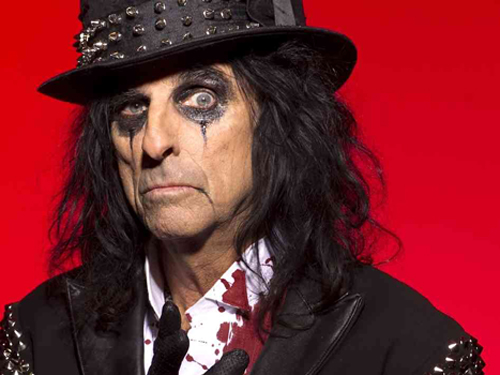 are the moments you can’t rehearse, because the audience went ‘unbelievable!’ Sort of like I do it every night. It might happen once in a while, but generally that’s not going to happen. I was Zorro at that moment.

AG: Looking back at all of what you’ve done throughout the years, do you ever think about how people perceive you as someone who started the shock-rock scene?

Alice: “Like anything else, I realize the history of rock n’ roll that, yeah, we were the first to do that – there was nobody theatrical before Alice Cooper. Nobody did a show like ours; nobody actually spent three months rehearsing what was going to happen. We treated it almost like a Broadway show.

“Of course we didn’t want to be Broadway, we wanted it to be our version of Broadway, which was a sick, twisted sideshow. But, it took a lot of rehearsal and it took a lot of making mistakes. I like to think that there was no (David) Bowie before us, there was Bowie after us, and what he did was take it in a different direction. There was no KISS before us. None of these bands were theatrical before Alice.”