Warning: A non-numeric value encountered in /home/riffyo5/public_html/wp-content/plugins/color-scheme-every-theme/classes/Options.class.php on line 108
 TF5: The Watchmen on "In The Trees" 20 Years Later - Riffyou.com

TF5: The Watchmen on “In The Trees” 20 Years Later

As we approached the mid-1990s, Winnipeg’s The Watchmen were one Canada’s burgeoning bands. After the group released their eventual platinum-certified and 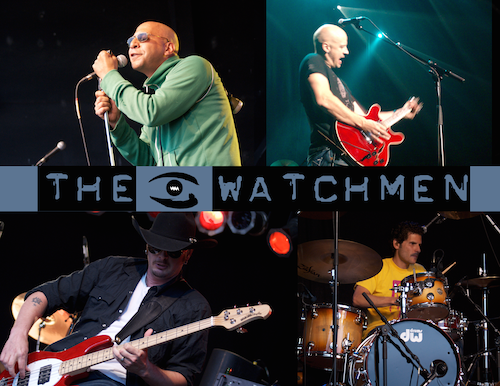 JUNO Award nominated album, 1994’s In The Trees, it was hard not to flip on rock radio and not hear one of their infectious singles: more specifically, “Boneyard Tree” became very hard to miss.

On September 16, the band – Danny Greaves, Joey Serlin, Sammy Kohn and Ken Tizzard – will release a 20th anniversary, deluxe edition of In The Trees. The two-disc package includes a re-mastered version of the album, as well as a whole host of rarities.

Recently, Riffyou.com caught up with Tizzard for a special edition of The Friday 5, where he shares with us five fond memories and feelings regarding In The Trees.

“Jake Gold contacted me to fly out to Winnipeg to audition for The Watchmen. On my first night there we had dinner at Faigie’s (Danny’s Mom) and I immediately felt welcomed. Later that night while jamming at the McLaren Hotel, I pulled out a riff for a tune I was working on. This jam turned into a song that we completed before we finished our first rehearsal – it ended up on In The Trees as a tune called, “The South.” I knew at this point that I had found some guys I could really work with.”

The Cold Reality that is Winnipeg

“I had never been to Winnipeg before [the audition]. When I got off the plane in December, I was in jeans, a t-shirt and a leather jacket.  The guys laughed at me and when we stopped by Danny’s house I got set up with some more suitable clothing. For the next few months we rehearsed non-stop at the McLaren Hotel in the furnace room. The heat would kick on and we would all start to sweat. After fifteen minutes or so, it would shut down and the old hotel would grow immediately cold. We were constantly in a shift of too hot or too cold.”

“Working with [producer] Doug Olsen was an amazing experience. He came in and immediately became the fifth member of the group. We had such a respect for him from his past work with great bands – this respect helped us in the decision making process. For the most part, we argued amongst ourselves while trying out arrangements. Having Doug around worked well because he made the final decision and we all, without even talking about it, agreed to follow his lead. His ideas fit in with our creative direction in such a perfect way that there was never any of that discomfort you sometimes feel when a new person comes into a group of musicians.”

“During the 22 months of touring that followed the release of In The Trees, it was amazing to keep breaking new ground. The small clubs got bigger, the festivals started giving us better slots, television and radio were picking up things quickly, and before we knew it, things were blowing up all over the place. It was a great whirlwind to be a part of and an experience you only go through once.”

“It is great to be reminded of the past in such a respectful light. Being a part of such a great band and having had the experiences of making such great records is an awesome part of my legacy. Having a major label put the energy into such a great part of our history is flattering and a bit of a surprise. My kids are really excited to see this stuff come to light.”

Catch The Watchmen play the Legendary Horseshoe Tavern in Toronto on September 18 and 19, plus Mavericks in Ottawa September 20. Stay tuned, as more dates are to be announced.