In a time when the metal genre has become so inundated with a megaton of the same old, same old formula, a refreshing shadow is being cast by a band hailing from Philadelphia, PA – Corners of Sanctuary. Their brand is metal; however, more 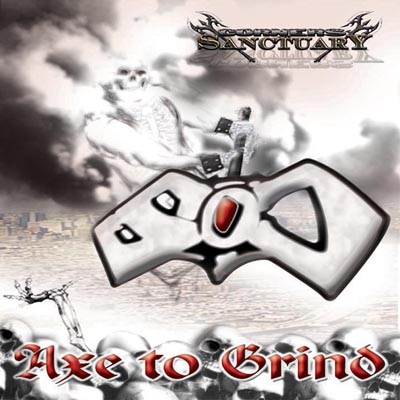 to the style of heavy metal that forged the roots of the genre’s existence – the stuff that made it great. The band’s sound is definitely in the traditional vein, but by no means does this throwback resonance make it any less powerful or hard-hitting to the modern listener.

Corners of Sanctuary’s latest release is titled Axe to Grind. It was released on November 1, 2013, through La Mazakuata Records. The album contains 11 tracks – each one stamping its very own personal statement, while adding to the overall commanding presence of the disc – making the impact of the whole album great because of the sum of its parts. A few notable tracks are “On the Hunt,” “A Fist Full of Vengeance,” and the haunting “Shadow Soldiers.” The music is simply lean, mean and rip-roaring.

Axe to Grind is nostalgic in that there are subtle hints of early Judas Priest, Accept and other NWOBHM giants, showing the band’s lineage and influence. Yet there is also a modern, relevant element that brings the music far above the genre’s early efforts. But even still, there is an ingredient that keeps the listener completely engaged and emotionally attached to the music – like being on a rollercoaster underwater. Unlike much of today’s singular aggressive approach, Corners of Sanctuary manages to incorporate a wide range of emotional twists and turns – none being in short supply. This roller coaster is metally charged.

If you like old school heavy metal, then Axe to Grind is a perfect addition to your collection. If you are looking for something different, especially in a market that is currently offering an unhealthy, hefty serving of much of the same dish, then this album and this band will be exactly what you have been craving.