Getting to Know: Alt-Americana Rock act, The J.O.B.

In today’s Getting to Know, we meet The J.O.B., a Virginia-based band comprised of heavily influenced musicians, some of which have deep military backgrounds. If you are in an up and coming band that would like to partake in a Getting to Know feature, contact [email protected] to receive the questionnaire and instructions. Thanks! 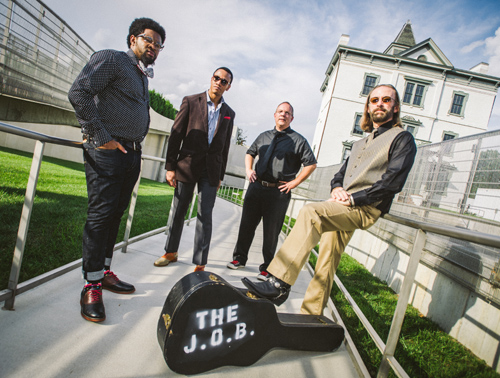 Who are you and what do you do?
“We are an original alternative rock band with Americana rock roots. We compose, record, and perform 100% of our music.”

In 100 words or less, tell us how your band has gotten to this point.
“Staying focused on our personal, artistic, and professional goals. Writing good, smart songs, not compromising to fit a popular mold, and audacious perseverance. Thick skin and a ‘never quit’ attitude.”

What is your latest release and how would you best describe it to someone who hasn’t heard your band?
“Our newest release is a studio single titled “Loved By You II.” It is a slow, sultry love song, somewhat dark and mysterious…a musical aphrodisiac. This song has a deep driving bass line from start to finish with impassioned voicing and an explosive lead guitar climax. It is the first of a group of all new songs we are recording this year to compile our fifth album. We have a targeted release for winter of 2014. The new single is available right now as a free download at our bandcamp page.

When making an album, which aspect of the process do you put the most time into and why?
“Song writing. It is the foundation on which the rest of the song depends. We consider most of the rehearsal phase to be an extension of the initial song writing, as details are worked and re-worked, and phrasing and structure are refined and polished. Without a solid composition of both song structure and meaningful lyrical prose, the finished product will be weak. All the neat riffs, effects, and production techniques in the world can’t give weak song composition strength. You can put lipstick on a pig, but it’s still a pig.”

What is the best part about your band and why?
“Our diversity. Jim’s background is rooted in folk rock influences. Our lead guitarist, Jason, comes from the hardcore, death metal arena. Len’s fretless bass styling is schooled from jazz and fusion roots. Our drummer, Antonio, comes from the big gospel stage. We manage to bring our very different individual backgrounds together to construct unique and dynamic song collaborations.”

What makes your band unique from the rest?
“Music background and technique aside, two of us are military veterans. Jim is a former US Army Airborne Ranger with multiple combat deployments to the War in Iraq. Our bassist, Len, was also an Army Ranger before the war and served as a paratrooper in two Airborne units during his enlistment. This military background brings relentless energy and a professional work ethic to the group in all our endeavours.”

How does your band survive the challenges of touring/gigging?
“We meticulously plan our activities. From gear loading to routes, lodging, budget and pay, merchandise and sales, roadies, venue contact info, marketing and promotion, sound and light plan… everything. Having a viable, workable plan for the road reduces surprises and allows for easy adjustments as things change. It is a huge stress reducer. We plan our work and work our plan.”

If you’d have to compare your band to another one out there, living or dead, who would it be and why?
“That’s always a tough one. We don’t think the answer is a specific band that we may sound like. Musically, we share various characteristics with a long list of players, some more recognizable than others…the real comparison is our motivation. When looking at the iconic rock bands that came before us and those selling out the big stages today, there is a commonality in our sense of purpose, our drive to create something bigger than ourselves, a need to play, to create a piece of music to which people can connect and share with us emotionally, to create something significant and lasting.”

Which band/musician would you like to share many drinks with? What would you talk about?
“There are so many huge talents out there. Today, we’d like to hang out with Dave Grohl. He grew up near my hometown in Virginia, so he’s a homie. His artistic life story is like a rock and roll fable. He looks like he has a great time turning everything he touches to gold. We respect what he does, how he does it, and could learn a lot from him in a few hours over some good single malt scotch.”

Previous: Tour Diary: The Penske File Do America (and Canada too!) Pt. 4
Next: Mötley Crüe to be Countrified on Tribute Album