Getting to Know: Paint, a Rock act that Puts Fans First

In today’s Getting to Know, we meet Paint, a dedicated rock collective that takes the appreciation of their fans very seriously. If you are in an up and coming band that would like to partake in a Getting to Know feature, contact [email protected] to receive the questionnaire and instructions. Thanks! 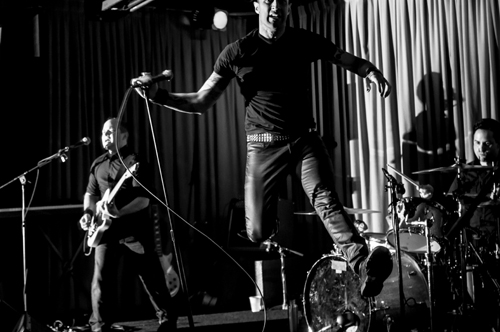 In 100 words or less, tell us how your band has gotten to this point.
“Through releasing Can You Hear Me? (2009), Where We Are Today (2011), and amassing new material for forthcoming LPs/EPs, we’ve earned a reputation as one of Canada’s hardest-working and tightly-run indie bands the old-fashioned way: touring. We’ve played over 200 shows from Vancouver to Halifax and built our networks and fan base through face-to-face interaction. While we do have a significant online presence through paintband.com and other outlets, the Internet is so oversaturated that a band who physically shows up in your city is almost an anomaly. We take pride in having earned our stripes on the road.”

What is your latest release and how would you best describe it to someone who hasn’t heard your band?
“Our latest release is the Capsulated: Music Videos DVD compilation (November 2013), which features videos for all 10 songs from Where We Are Today, four from Can You Hear Me?, and some bonus documentary materials. We’re currently shooting a film called 11:11, funded through IndieGogo, which is a black-and-white narrative accompaniment to our forthcoming EP that will be a vinyl/digital release.

“We have enough new material for an LP and a half at this point, and we’re more excited about the songs than anything we’ve done. But as we continue to shape everything live, we’ll get to the studio eventually, one bit at a time. In terms of how we’d describe ourselves: ‘classic rock of the future’ seems a little crass, but it’s definitely big, anthemic stadium rock played in club environments. Brit rock, new wave, and post-punk are pretty significant influences.”

When making an album, which aspect of the process do you put the most time into and why?
“Every aspect of making an album is equally important. Of course, it starts and ends with song writing. The slickest production on earth can’t save a bad song. Arranging and stage-testing materials in a live setting is tantamount. You may think that bridge is awesome until you play it live and everyone goes out for a smoke. Song writing, probably, takes the least amount of time though; ideas just spew out for us generally. The finer details in the studio are a lot of fun.

“These days, everyone thinks you can make a record in your mom’s basement with a MacBook and while that’s great in theory, it’s really undercut the art of production and how big a role that plays in making music sound the way it does in the artist’s mind.”

What is the best part about your band and why?
“As much as we’re known for – and put the most effort into – our live show, sometimes just sitting down in a room with nothing and coming out an hour or two later with a great new song has really become one of the most exciting things about being in Paint. Although without the audience it’s a self-indulgent affair, we’re always thinking how a song will translate into a live setting. And the absolute best part: we had a show recently in Toronto where I (Robb) was pretty awfully sick and didn’t have most of my upper vocal register. The audience crashed the stage and wailed along with me – and to songs that haven’t been recorded/released yet. You’d be hard pressed to find anyone who wouldn’t say that isn’t the best part about being in their band. Experiences like that are humbling and beautiful, and we don’t take them for granted for a second.”

What makes your band unique from the rest?
“Our songs first and foremost. We’re not afraid to write a hook, and make no apologies for having a pop sensibility. Yet we come at it all with a punk rock DIY ethic. Our relationship with our audience and our use of multi-media elements to create a stadium rock experience in a small club is something no other band at our level is doing – or at least doing as well, if I may speak humbly for a moment.”

How does your band survive the challenges of touring/gigging?
“Stick together but give each other space. Put the business and your health first and second, and the party third – if at all. Stay grounded. Exercise. Bring your own food and cook while you’re on the road. Visit old friends in every city you go to. Listen to comedy or something other than music in the van. Always find ways to break even and be smart with the band’s money. And if you’re like us and do everything yourselves (from tour booking, PR, web design, social media, scheduling, etc.), then recognize that playing the gig is the payoff, and probably the least amount of work compared to the rest of the business. So enjoy it. Relish in the fact that you’re there to share music and ideas with like-minded people. Hit up local record shops. Go for walks. Warm up properly for every show. And be there on time. Everytime.”

Would you rather be critically-acclaimed; rich and famous; or an under-the-radar band with a dedicated fan base?
“The Smiths set a benchmark with treating their audience as intellectual beings worthy of being credited for their intelligence – in contrast to the pop music of their day (and still today) that talks down to its audience. Consequently, The Smiths gained a small but intensely loyal fan base. This led to critical acclaim and fame, but ultimately they were always a pocket band with a devoted following. To be able to put food on the table without having a Joe job is the conundrum of the musician in the 21st century.

“For us it means more to have a relationship with an audience who will always come out to see us when we play their city; who we know by name; and who get excited when we bring out brand new songs (or obscure album cuts). But we’d probably be lying if we said there wasn’t a part of us that first picked up an instrument because we saw someone we admire do it first. Like it or not, that’s a form of fame.”

If you’d have to compare your band to another one out there, living or dead, who would it be and why?
“We were once called ‘a more feminine U2’ by Alex Pulec from The Nursery. That seems pretty accurate. Which, I guess, is kind of what Suede always were. Those would probably the most obvious reference points.”

Which band/musician would you like to share many drinks with? What would you talk about?
Depends on which one of us you talk to! Devin might say Anton Newcombe or Ringo Starr. Jordan might say Billy Corgan or Tom Morello. I might say Billy Bragg, Michael Stipe, Ani DiFranco, Dennis Lyxzen, Bruce Springsteen, Chuck D, or Neil Young; anyone who’s bridged music with activism and made a commitment to be more than simply entertainment. I’d love to talk to Nick Cave, Conor Oberst, and Morrissey about song writing. And Marilyn Manson. I think we’d have some great stories to trade.”