Q&A: The Beaches Talk About Youth & A Cool Tour Mom

With members still in high school, up and coming Toronto rock quartet The Beaches are still at that stage in their careers where 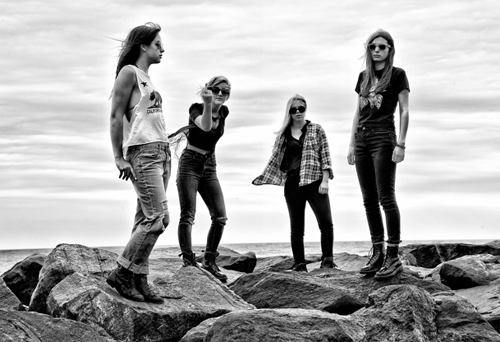 questions about the ages of band members come up often.

For whatever reason, when you have your own label (Done with Dolls), tour the UK with Brody Dalle, make a grand supporter out of Our Lady Peace’s Raine Maida, and get booked at some of the summer’s most notable music festivals, people tend to think your teeth should be a little longer.

But, it just so happens that The Beaches – Jordan Miller, Kylie Miller, Eliza Enman McDaniel, and Leandra Earl – have in just two years released a pair of EPs that make you easily forget that the band is really just at the beginning of its ride.

Recently, Riffyou.com caught up with the band to discuss their new EP, Heights, being young, and wanting to be treated like everyone else.

RY: Congratulations on the release of Heights! You had Raine Maida produce the first album (Self-Titled), but you chose to handle the producing duties yourselves this time. Why’d you decide to go that route? How much of a factor was having the right level of confidence?

Kylie: “Working with Raine on the first EP was a great experience. For the second EP, we really took control of the writing process, so we also wanted to take control of how the final product sounded. Having more confidence was definitely a big factor in why we decided to self-produce. We became more confident in ourselves as song writers and as musicians, and wanted to experiment with the production side. James Quinn produced alongside us. Over all it was a great experience.”

RY: How differently was this EP approached considering that your fan base had likely expanded since your 2013 release?

Leandra: “Well, the whole process changed a bit after I joined the band in 2013. I hadn’t been there for the previous EP’s writing sessions, but with this EP we all wrote the songs together and really experimented with my new synth sounds. They didn’t have a synth/keys player before, so once I joined the band, we started playing with a synth-oriented sound while still keeping the edginess of the guitars from the first EP.”

RY: Obviously, a big narrative surrounding your band is that you’re all rather young. Has that storyline become old to you and something that you want to go away? If not, do you find it important to act as an influence to other younger bands that are scared that they may not ever find their footing?

Kylie: “Yes and no. We like the fact that young people can look up to us and aspire to be musicians too. However, age is really only a number – it does not affect how hard you work. We feel like sometimes we are underestimated and deemed ‘inexperienced’ just because of our age. This shouldn’t stop young bands from pursuing their dreams. The truth is people are always going to doubt you. Young bands just have to blow people’s expectations even more.”

RY: I know some female musicians like being referred to as female musicians, or members of a female band. While others, find that to be a sexist way of thinking, and that a musician should be defined by their music and that gender shouldn’t be focused on. Where do you sit on this issue?

RY: Having toured with Brody Dalle must’ve been quite the trip. Considering how experienced she is within the 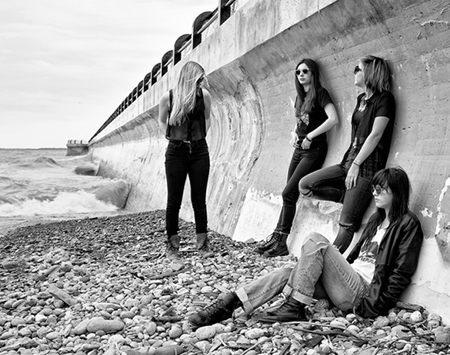 music industry, what did you learn from her? Did you find yourselves picking her brain mightily?

Leandra: “Touring with Brody was such a crazy, fun, and thrilling experience. Her and her band were so welcoming and friendly towards us – she was like our tour mom. We learned a lot from Brody, like how great she was with all of her fans. She always took the time to get to know every single person she spoke to. After every show she would come to our dressing room and chat with us about whatever (Rob Ford came up a lot). It was cool to talk to her about tour life and life on the road away from her family and how she copes with that. We can’t wait to play with her again!”

RY: You have a lot of festival opportunities happening this summer. Of course, there’ll be a lot of new ears and eyes on you. What are you hoping to achieve at these shows?

Leandra: “We’re really excited for a summer full of music festivals! We’re just going to go out there, play the best we can, and hopefully gain some new fans. Festivals always attract a ton of people who are out there to have a good time, see their favourite bands, and listen to new music – our favourite kind of people!”

RY: What is one thing that people need to know about The Beaches that they might not already?

Previous: Getting to Know: Paint, a Rock act that Puts Fans First
Next: New Death From Above 1979 Album Coming in September