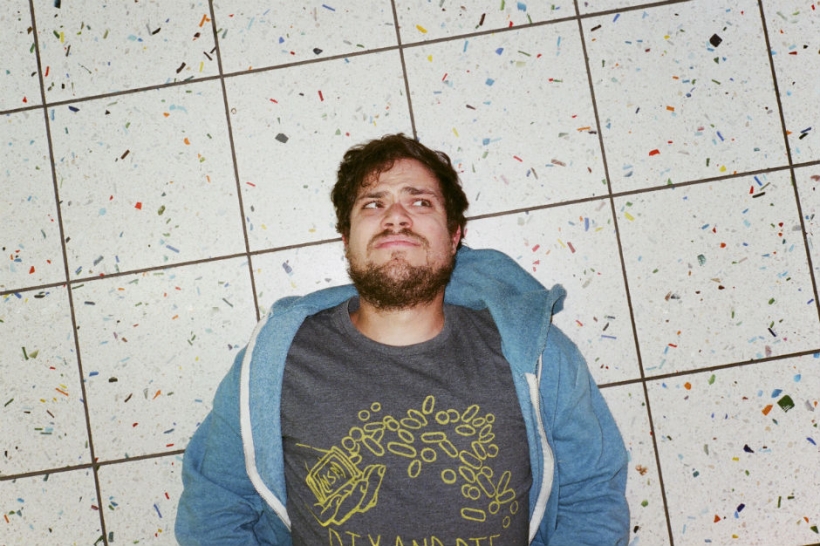 Who are you and what do you do?
“I’m Jeff Rosenstock. Sometimes I turn off the TV and pace back and forth in my apartment trying to come up with something not-so-depressing to write about. Eventually, when I realize I can’t, I go into a small room at my apartment and record it anyway. Then I show it to my friends and when we play it together I go ‘faster, faster, faster, too fast.’”

In 20 words or less, how would you describe your band?
“A little much for most people.”

Why should people care about your band?
“If you consider all the bullshit people waste their energy caring about – parking tickets, Kitchen Nightmares, sports injuries, Instagram tags, pretending whoever is getting elected won’t be exactly like the person leaving – I think music is very high up on the list on things worth caring about. And since you’re already listening to music, why not listen to our record? It’s pretty good.”

What is the most hilarious, frightening, or weird thing you have seen from the stage or while on the road?
“I changed lanes in the middle of nowhere in Kansas once, and there was this old biker behind me that gave me a really exaggerated middle finger afterwards. I checked my blind spots and everything, and this guy seemed like he was at least 1,000 feet behind me by the time he was cursing me out for cutting him off. I don’t see how I could have possibly put him in danger, but lucky for me visions of me changing lanes a little too quickly and splattering that man all over the desert is something that haunts me two or three times a week as I fall asleep.”

If you become a band that eventually fills stadiums or arenas, what would be the most ridiculous thing you’d require backstage?
“I saw that Grimes asked for puppies to play with every night and I think that’d be pretty sweet. I also think if you’re huge, your best bet is to just put more money on your rider right? Visa gift cards? It’s like asking a genie for more wishes.”

Which band could your band defeat in a street fight? What methods would you use to ensure victory?
“If ever approached for a real fight, like a ‘some crazy big motherfucker’s gonna jump you fight,’ I think an effective strategy might be to just start vomiting all over the place or if you, like me, are emetophobic and can’t really do that very easily, just start furiously masturbating. I imagine your opponent would be like ‘ew, this is fucking too weird and gross’ and run away. If you ask me, that counts as a victory. A non-violent victory too, so that’s like a double vic. That said, I think we could get any band with that.”

What is the most pretentious thing you’ve seen or heard from another musician/band? Did you love it or hate it?
“I honestly try to block all this stuff out of my head ‘cause it depresses me so much. This isn’t a cop-out. I would happily talk shit on pretentious dickheads ‘til the cows come home if I could just think of something right now. Everyone’s got something they’re good at – for some people it’s fixing cars and for some people it’s writing songs. Acting high and mighty ‘cause you’re good at something is dumb, especially with music. Music is for everyone.”

How do you feel about smartphones lighting up concert venues instead of lighters?
“I would like to implement a rule where instead of holding up the smartphone light, you hold up the self-facing camera and then point it at the stage so we can all make sure we’re standing in the right spot. I can’t tell you how many times I’ve thought I was singing into the center microphone when it turned out I was sitting behind the drum set! How embarrassing. Also please don’t really do this. Untether.”

If you had to be a tribute act for just one band, who would it be and why?
“It would be for 311. I would also want to tribute the lifestyle it appears 311 has, which is pretty sweet right? Smoke a ton of weed, play music in beautiful places with your friends, make a bunch of money and just chill out? Sign me the fuck up.”

Is it better to burnout than to fade away?
“Burnout. But once you do that, you better start another fucking fire.”