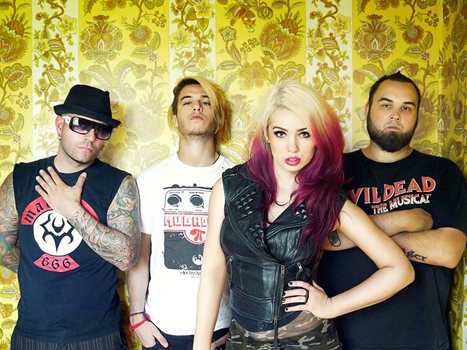 For an artist to chart a new course after developing a firm reputation for a specific style of music, much risk is involved. Fans of the past can become alienated and jump ship; skeptics will contend that the shift is more of a strategic move than an attempt at rejuvenation; while those uninterested in over analysis have the right to choose if what’s new gets them going, or forces them to just go.

In the early 2000s, Skye Sweetnam was a JUNO-nominated pop star that wrote and recorded her first album at the tender age of 14. Her 2004 album Noise from the Basement, which was released through Capitol Records/EMI, shot up the charts on the back of its cutesy and catchy single “Billy S. (Shakespeare).”

While immersed in the pop landscape, Sweetnam would eventually form a relationship with vocalist and guitarist Matt Drake, who at the time was primarily focused on his ska/reggae outfit, Dodger. The two, who have also been romantically linked (out of respect, Riffyou.com opted not to explore if this is still the case), soon became firm musical collaborators.

As the years went on, both Sweetnam and Drake began reaching crossroads in their respective careers. They didn’t hate the music they were doing, but both needed a change. It was time for something heavier: it was time for Sumo Cyco.

“Skye didn’t want to do the same kind of pop music [anymore],” shares Drake with Riffyou.com. “I didn’t get where she was coming from at first, but then she showed me some of the bands she wanted to go with – like Pantera and System of a Down. She said ‘this is what I want to sound like, but with my vocals.’ I thought it was a neat idea, so we put our heads together and came up with a couple songs that were heavy rock and had a bit of a dance feel.”

“I was going on stage with this pop persona and then I’d go backstage and want to listen to all of the rock n’ roll. There was this side of me that was waiting to get out there and start growling and screaming,” recalls Sweetnam. “In the past when I was making the transition from my pop girl [image], I didn’t know if I could pull it off or if people would take me seriously. But, I was the only person stopping me from doing it.” 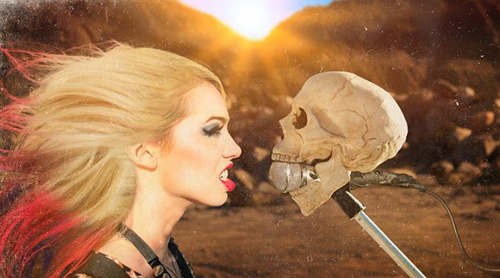 As Sumo Cyco – which also features Ken Corke (bass) and Ryan Leger (drums) – began to take shape, so did the group’s uniqueness. Image wise, Sweetnam and Drake credit their huge appreciation of horror movies for their supped up horror-esque style and imagery, while the intense roaring of the quartet’s sonic landscape is easily comparable to Rob Zombie’s workings, even if Zombie’s not an attractive woman with a strong roaring, yet sometimes howling voice. To simplify it, Drake sees Sumo Cyco as “dancehall metal.” Can’t say I’ve heard that one before.

Regardless, the group has after less than a handful of years on the scene, developed quite the groundswell of support without any managerial or label support. They won Indie Week Canada in 2013 and have thus far had their music videos viewed over one million times upon YouTube – the latter is not by accident.

During the band’s beginnings, it was decided that the focus would be placed upon releasing a single for sale, then follow that up with an accompanying music video. Thus far, seven singles are out, and seven (official) accompanying videos have been made by the group.

“We don’t really believe so much in [making] albums,” offers Drake. “They’re dope, but I don’t know if kids are buying albums anymore. When we started this project, we thought, ‘let’s just do singles and videos.’ You can be on a label for a year and not have the type of media work that we’ve done for ourselves. We make our own rules and that makes us happy.”

Although the strategy has worked thus far, Drake admits that a full-length album is set for release this year, hopefully by the spring. While label interest hasn’t forced this move, he explains that part of the deal with receiving funding support from FACTOR was that an album needed to be made. Now, the group is just waiting to sort out distribution details. Fans of Sumo Cyco videos fear not, those will still come, and as Drake explains, all songs from this album will have one and they’ll connect to tell an entire story.

Needless to say, the bigger the Sumo Cyco cavalcade gets, the more Sweetnam will have to encounter the faces that recognize her from the past and are forced to adapt to where she’s at now. From this writer’s perspective, she doesn’t appear terribly concerned.

“The best reaction I find is when people don’t recognize me and then it clues in later – they’re rocking out to these psycho jams and they realize ‘hey, oh my God, you’re that girl that had that song back in the day.’ It’s fun for me,” says Sweetnam.

“To think at 14 I was singing ‘I don’t need to read Billy Shakespeare,’ that was pretty cool,” she continues. “I was really saying what I felt at that time. With everyone, if you look back 10 years and think of what you were doing and what you were into, you’re going to roll your eyes a little bit. [But] I’m not running away from anything – I’m evolving.”

Previous: Oh My Yeezus! Kanye West is Coming Back to Canada
Next: KW’s Strummerfest Turning to Fans for Financial Support