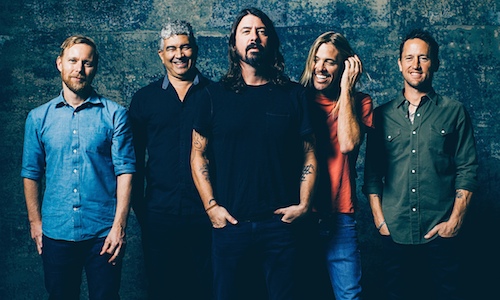 on Blu-ray and a number of other formats with a ton of special bonus features.

Yesterday ahead of his Lieutenant side project performance in Toronto, Riffyou.com asked Foo Fighters bassist Nate Mendel about what creative direction he hopes the band takes moving forward.

“I’d like to do what we have set out to do, which is to find new ways of making a Foo Fighters record,” replied Mendel. “[Sonic Highways] had a theme to it and a purpose. There were elements added to what the band does – not only just doing the television show and having this documentary element – but creatively with how Dave [Grohl] was writing his lyrics and the way we chose to record.”

Mendel noted that it’s important to remain creatively inventive, all the while not relying strictly on novelty to progress.

“Foo Fighters have a sound,” offered Mendel. “Forget it, the next album is not going to sound radically different from any of the other ones – that’s kind of a given. So, it’s everything else around it that we are going to strive to make interesting, to justify another 20 years.”

So, is there another 20 years in the cards for Foo Fighters?

“Yeah, I think so. I mean, I am unemployable. I am fucking completely unemployable,” said Mendel with a thick dose of humour and sarcasm.

“But it’s not just that. It’s not about ‘This is all we’ve ever done, so we’re going to continue to do this.’ We like being a band and I think that we’re still doing good work and we still enjoy it. That’s the justification…and we can’t do anything else.” {Laughs}

Stay tuned for our Q&A with Nate Mendel regarding his Lieutenant solo project and its debut album, If I Kill This Thing We’re All Going To Eat For A Week.