Metallica’s “Through the Never” Film Comes Home in January 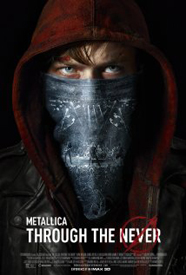 Metallica’s much talked about IMAX film, Through the Never, will be released on January 28, 2014 through the band’s personal label, Blackened Recordings. It will be available on DVD, Blu-ray and 3D Blu-ray, plus digitally and through Video On Demand.

Along with the film, which centres around a Metallica crew member being whisked off on a crazy adventure as the band performs a massive arena show, will come with a bunch of extras. Those who purchase the DVD or Blu-ray packages will get extensive behind the scenes footage, including the 80+ minute Making of Metallica Through the Never documentary.

Special limited edition packages will be available to the band’s Met Club, who will also “get a first crack” at nabbing a limited edition set that comes with a stage prop used in the film, as well as a lithograph print autographed by the entire band.

Click here for more details about the varying Through the Never packages.

Check out the film’s trailer below:

Previous: Q&A: Dear Rouge on Being in a Band with Your Spouse
Next: Osbourne Says Sabbath Reunion Didn’t Lead to Relapse