Q&A: Dear Rouge on Being in a Band with Your Spouse 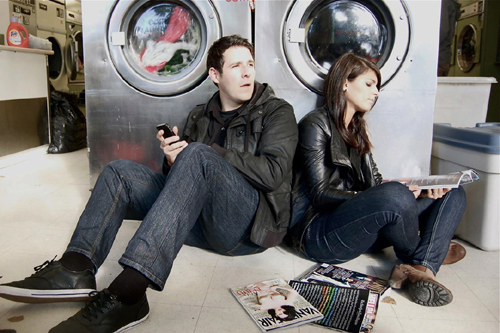 BC-based electro-rock-pop duo Dear Rouge – Drew and Danielle McTaggart – not only makes music together, literally, but they are also making a life together as married bandmates. Unlike many love stories, this one didn’t start with one of those love-at-first-sight moments.

As Dear Rouge prepares to release its 2014 follow-up to the 2012 Kids Wanna Know EP, Drew gives RiffYou.com the lowdown on how he and Danielle came together, as well as how the pair have managed to make a band and marriage last at the same time.

RY: In 2009 when you and Danielle were on the road touring with separate projects, were you a couple?

Drew: “Nooo, we were not a couple. We knew each other, but didn’t get along romantically right away at all. I heard her live one time and I thought she had the most amazing voice – she was doing heavier singer/songwriter stuff. I suggested that we do a real high-energy track in Vancouver (“Heads Up. Watch Out.”) and after that we sort of found our feelings for each other.”

RY: Many bands have had married couples in them. Do you find it tricky being in a band with someone you’re married to?

Drew: “Yes, there are positives and negatives. The huge positive is that you have someone there who is on your side supporting you and you can work together as a team. If someone is feeling down, you can motivate and encourage each other. But, working together is not at all romantic. People think that when we write together we get a bottle of wine, light some candles and just create songs. For us, it doesn’t work that way. We sometimes write separately and with other people. It’s not like what people would picture.”

RY: How do you balance relationship emotions with the ones that obviously come about when working so closely with someone?

RY: What advice would you give to others who are in the same situation as you and Danielle?

Drew: “Figure out how you work the best and do not have any expectations of what it would look like. The hardest thing for us was that Danielle and I had different expectations of what doing music together would look like at the beginning. Sometimes you’re disappointed if it doesn’t work out the way you pictured, but you have to find your groove – especially the first time in studio and the first time on tour. The first time of everything was so difficult because we were still learning how to work with each other. Now, it’s getting easier and fun.”

Check out Dear Rouge’s video for “I Heard I Had,” the lead single for the band’s forthcoming 2014 album. Also, the band is currently touring Canada, so click here to find out if they’re coming to your town.

Previous: The Friday 5: Why Lady Gaga will Do Great with Muppets
Next: Metallica’s “Through the Never” Film Comes Home in January