While the band is in the midst of putting together the follow-up to 2010’s Life Turns Electric, Black is taking the opportunity to hop aboard a solo spaceship with his debut solo album, Moon Boot Cocoon.

Instead of just hoping to bang out 12 tracks of anything to make a solo project a reality, Black opted for a more complicated, conceptual approach, by giving his lyrical offerings more of a sci-fi feel and theme to them.

In an interview with Riffyou.com, Black explains how he ventured into a whole new world, and why he decided to paint this album with an intergalactic brush.

RY: How’s life as a solo artist treating you?

James: “It’s been a wealth of different types of feelings for me. Twenty-plus years into a musical career and still having crazy new feelings is pretty awesome. I just feel so satisfied with the music, as well as the representation of me and what’s inside of my head.”

RY: The obviously question would be: why did you feel that now was the right time for this?

James: “It’s mostly because of the songs. During the first part of my career I was learning about making music, now the second part is about writing lyrics. I was always writing lyrics, but they only recently started to sound like something that I’d be interested in sharing with everyone.”

RY: Being with Finger Eleven, you’ve seen the lyric-writing process in action. Did you gain a new appreciation for it here?

James: “Within myself, I didn’t know that if I worked a little harder, I could make [the songs] more special. At first it was about making vocal sounds that worked with the song and idea, but eventually that has no meaning. Then I started to think, ‘what’s the meaning of things that matter to me?’

“Maybe I did underestimate how hard it was, but I think I underestimated my own level of creativity when it came to words.”

RY: Was there any kind of struggle, lyrically, to reveal certain vulnerabilities or internal thoughts that before you could just translate on guitar, but not so much into words?

James: “Yeah, that was a part of the challenge. At first, I was just writing lyrics like everybody else…they were either talking about being lonely, or being sad, or having a broken heart. I realized that as a listener, I don’t really like those types of songs. I really enjoy a song where I can feel a bit of a narrative. It was that moment of realization where I decided to hijack what Sci-Fi authors do – they talk about very human, basic emotions, but they frame it in a different kind of context, so that it’s not just the author speaking boldly about his emotions.”

RY: Why are you seemingly so fascinated by Sci-Fi?

James: “It started as early as watching Star Wars as a kid…it [became] a way of culture and a way to think about things. 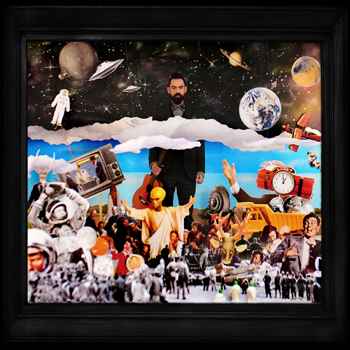 Spaceships, Jedi Knights, blowing up planets, and going to cantina bars where there are a thousand races of aliens. As I’ve grown, I’ve been a big reader and over time I realized what I gravitated towards. I don’t tend to read non-fiction – it tends to be fantasy or sci-fi. As I’ve said, what I love about those stories is that they’re telling you about the simplest human morals, but it never feels like you’re being preached to…because it’s disguised as an adventure.

“Some of the things that I was hoping to say on the album, I wanted them to [be more universal]. As a person, I tend to shutoff when someone starts to speak at me. If they come around the long way and it’s enveloped in a story, then I’m more apt to take a lesson from it.”

RY: The thing with sci-fi is that some people really love it, while others think it’s really weird. Since your album has that sci-fi tinge to it, are you concerned that there’ll be a side of strong love and potentially a side of people finding it too weird?

James: “That’s not really a concern. I think that’s what should happen. There isn’t one thing in the world that is for everyone. Hopefully it is polarizing and gets a few people who wouldn’t usually be into [sci-fi] excited. In some ways, I want [those two sides] to happen. That’ll confirm to me what I’ve been told and feeling for my whole life – that I’m a little bit weird.”