Watching July Talk on stage is like taking in the best type of improvised theatre routine you could imagine. Nothing is scripted; 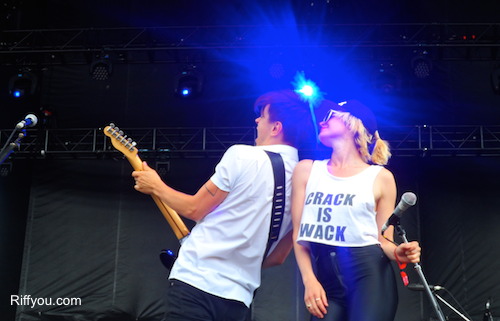 the safety net is dangling by a thread; and a dangerous enthusiasm is always one tiny step away from escalating beyond control. Hands go into mouths; hands grip throats; and hands smack the face of its owner.

When watching this beautiful madness, you quickly begin to think that these were the roles co-vocalists Peter Dreimanis and Leah Fay were born to play.

Along with fellow band members Ian Docherty, Josh Warburton, and Danny Miles, Dreimanis and Fay take to the stage with a relentless intensity. They push each song and each other as close to the edge as possible. It’s fascinating to see.

Mere hours after one of these affairs, Riffyou.com sat on a hill with Dreimanis as he explained the theatrical side of July Talk, pushing an audience’s boundaries, and what can happen when you’re not afraid to shed blood for your fans.

RY: July Talk has become revered for putting on a live show that’s actually a show, minus perhaps useless props. How much do you appreciate the theatrical side of being a musician?

Peter: “I’m so thankful that we’ve been given the opportunity to explore something. When you’re a doctor, there are certain preconceptions about what you’re going to do on a day-to-day basis. Walking into a rock n’ roll show, if I’m a guy wearing a guitar and Leah is a woman and we’re standing on the stage, there are preconceived notions about what that night’s going to be. What’s important to us is that we really try hard and push each other to fuck with that. And, maybe say, ‘what if we don’t do what is expected of us?’

“For example, if a beach ball comes on stage, what if I rip it in half and wear it like a coat? What if Leah decides that she wants to get covered in fake blood? What if we cut each other and start bleeding over each other? With these ideas, we’re just at the tip of the iceberg. We’re really interested in pushing each others boundaries, and we want to take people out of their comfort zones. There’s a vulnerability and honesty to [our performances] and we want to push that as far as we can.”

RY: That’s interesting, because a lot of people will associate genres like metal or punk rock as the ones that put on the types of stage shows that you guys are doing. Not a lot of rock bands necessarily fuck with the format. Is 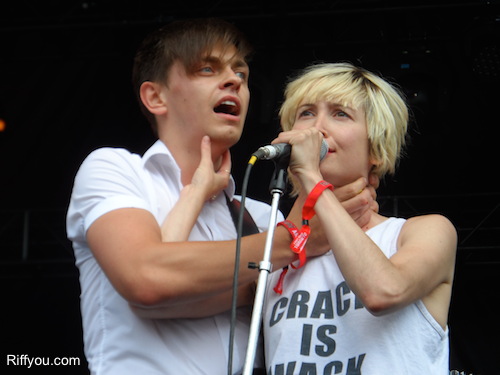 it important for you to fuck with the format – do you think that adds something to the songs?

Peter: “To be honest, I notice that a lot more strongly when it’s a new song that we wrote after we figured each other out live. When we play a new song, it feels to me that it’s almost like we’re blocking. We know what’s going on, we know where each other are, and we get to experiment with the lyrics…the lyrics actually form our movement.

“Moving forward into recording the next album, I believe everything will become one cohesive thing. Our first record was every member’s first record. Now everything we’re doing has this meta situation, because most of the songs are about each other and what we’re going through, or how our lives got turned upside down. Yet, we’re performing in front of these people who have been watching the whole story unfold. It’s become a self-aware, conversational experiment. I’m really enjoying it, and I don’t know where it stops and where I begin.”

RY: How have you reacted to having your life flipped upside down?

Peter: “It’s a fucking dream. I get to travel the world with my four best friends. I feel like what we’re doing is really important. And, I think that the times where we’ve played shows that really hit something is when we all go on stage and think that we’re doing something important. We need to be in that state of mind and convinced of that.

“The things that can knock you away from that is realizing, ‘holy shit, a bunch of people just showed up to watch us play on a Sunday afternoon in Toronto and we don’t deserve that.’ It’s staggering to think about, but we’re enjoying very second and hopefully we get to continually explore the conversation, the difference between us, and really bring something new to the duet element.”

RY: Has this acceptance you’re received – both from your performances and music – leant you a certain degree of added confidence that you can take into the making of your next album?

Peter: “It changes what you do for sure. You have higher expectations. When we see the reaction of a crowd that really wants to watch us play and knows our shit, it does put more pressure on you and make you want future material to be that much better.”

RY: You’ve just hinted at new material there, so what can you tell us about it?

Peter: “We have new songs that we’ve been playing live, and we love them. The parts of the July Talk show that have most interest us – being the time that we to improvise and be spontaneous – we’re writing songs around that ideology. This is probably the main difference. If you listen to a song like “Guns + Ammunition” or “Someone,” there’s not enough space. We’ve 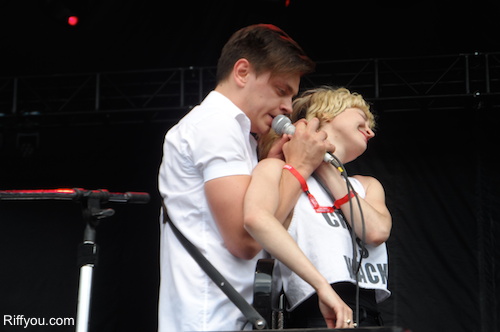 really learned to, as we write, leave more space and empty area in a song, and let the show inform what fills that space.”

RY: Do you ever envision a time or instance where the stage theatrics go to a level, or place, that you’re not comfortable with?

Peter: “There have probably been times where I’ve pushed Leah too hard, or she’s pushed me too hard. In Munich, I hit Leah in the face with the headstock of my guitar, by accident. We were just thrashing around and I caught her really hard. She yelled, ‘get me some fucking ice right now!’ The crowd’s looking on thinking, ‘holy shit.’ So I go get this ice, bring it back and she puts it up [on her face].

“Then, I try to get the crowd to wake up, and Leah goes, ‘if you want them to wake up, why don’t you just go and hit them in the face with your guitar?’ I looked at her and started hitting myself, as if to say, ‘sorry, what do you want me to do here?’ So I then took my guitar and I hit myself as hard as I possibly could…her face went from a smile, to her looking at my face and all the positivity slipping away. My face just split open and blood was pouring down. The crowd got on board with that and it really worked. It wound up becoming the highest-energy, most adrenaline filled show I’ve ever been involved in.”