Interviewing anyone that you’ve never met or spoken to before isn’t always easy. You’re not necessarily counting on 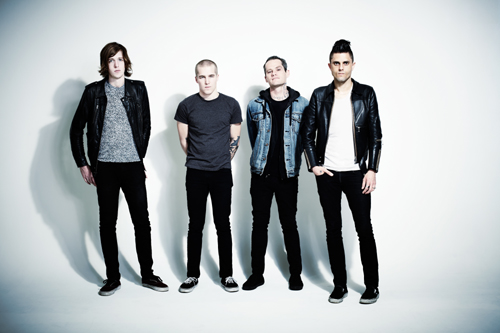 forming a fast-friendship, as much as you’re hoping for a mutual understanding and a get-along.

Now, try to do that via email. That’s much harder. Although not the ideal interview medium, the results can still be plentiful with the right subject. In this case, Justin Pearson of Southern California punk band Retox was not the right subject.

When speaking about the band’s 2013 album, YPLL and if new material is in the works, things sounded relatively promising. But when, (gasp!) Riffyou.com seemingly made the error of asking him to provide some words of wisdom to up and coming musicians (because we like when artists do that around here), the train began to roll off the track, as did Pearson’s patience for the interview.

Here’s how it went down:

RY: YPLL came out last year, so I was wondering if and how the feelings of those songs have changed for you?

Justin: “Overall, some have changed. There are select tracks that are no longer being played for various reasons. Or some that stuck and will remain for a good part of our future.”

RY: What has the reaction of YPLL been like, and has it met, exceeded, or fallen below the expectations you had for it?

Justin: “For me, my expectations have all been met. The effort, energy, and soul I put into YPLL or any album generally is for myself. I have no expectations from outside forces.”

RY: Have you begun work on your next record? If so, how’s the direction of it looking?

Justin: “We recently tracked two songs for a split 7” with Narrows soon to be released on Three One G. We are also in the process of writing our next LP, which is coming along nicely. There is a constant evolution of what we do, but it’s hard and maybe impossible to put into words at this point. Plus, I think that sort of commentary or description is what the critics are for.”

RY: From what I know, lots of young musicians quickly gravitate toward punk rock. What is it about this style of music that attracts kids with musical aspirations?

Justin: “I can’t speak for anyone other than myself. Sure, when I was 10 or so, I discovered punk and it ‘spoke’ to me. But it’s not really about the bands per se, but more so the ethics. You know, why was I attracted to something? What were the elements in my life or in my world that drew me to obscure, or abrasive art? Things nonmusical and not-related elements to any sort of music genre holds the key to why I have done what I have done, and continue to do. I assume this bullshit vague answer of mine would apply to your question and maybe to the young people you are asking about.”

RY: Some of these young musicians likely focus way too much on trying to find that ‘punk’ sound. What advice would you give them in terms of how they can best chart their own path?

Justin: “I would not give any advice. Especially when considering punk ethics. As Brian Evans said, ‘It’s peasant music, it’s like a polka beat. It’s the reason why I listened to bands like NOFX and now I hate them. I moved on. I have more to think about.’ That can be applied musically, artistically and so on. It’s like a fart joke that is only funny once. There are more important things, more pressing, more threatening things, to focus on and address.”

RY: Stage presence is always a crucial element to a band that wants to gain a great following. What would you tell a band that has maybe found its studio sound, but is struggling to find its live identity?

Justin: “Again, I would not offer any advice. I think if you are doing something sincere you do not need any direction… live or in the studio. At times, I think the less you know or understand, the better off you might be in finding yourself. If someone is looking for a ‘great following’ you can probably go fuck yourself. Like in the last question, asking how to chart your own path would not entail asking someone like myself…or asking anyone.”

RY: What is the hardest part about being in a band in 2014? What survival tips would you offer?

RY: If a kid were to ask you why he should or shouldn’t start a band, what would you tell him?

Justin: “Look, I am going to address these last two questions here in one answer. I’m sure this will make me look like a complete fuck head to some, but this is my honest opinion in conjunction to the interview. I think the questions here suck. Let me please explain myself here.

“Asking about a topic or subject matter such as ‘punk,’ that has not only been bastardized in my lifetime, but something that is so much more depth than music and style, I see so many flaws in asking anyone, especially me, how to help, steer, or educate someone in the way of playing music.

“The appropriate answer would be to not even take the time to answer any interview. Let alone formulate answers that might hold some relevance to someone. And with all that being said, considering the fact that ‘punk’ has been thrown around in the questions presented here, I would say that being genre specific is outdated…it’s the complete antithesis of punk. So maybe this will be suffice: Don’t start a band. Fuck you.