The prolific Jack White will take Record Store Day 2014 (April 19) by storm, by recording and releasing The World’s 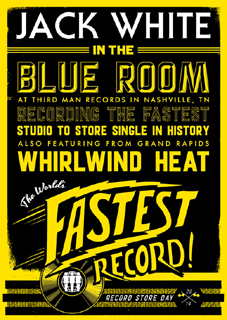 On that day, White will take the stage within Third Man Records’ blue room for “a full performance” and to record a limited edition version of “Lazaretto,” the title track from his forthcoming album.

The masters will then be speedily taken to United Record Pressing, who will press the 45s immediately, before bringing back the final copies to the Third Man headquarters for sale.

The announcement posted upon Jack White’s official Facebook page, also notes that “an extremely limited number” of Ultra Tickets will be made available through the Third Man Records Vault to Platinum Members, starting at 3pm CT today.

With this a ticket, a person will receive admission to the show (which will also include a performance by Whirlwind Heat); a copy of The World’s Fastest Released Record 7”; plus a coloured vinyl RSD reissue of Whirlwind Heat’s LP, Do Rabbits Wonder?

The World’s Fastest Record will only be sold on Record Store Day through the Third Man Records Nashville storefront.

Time to book a flight…