Warning: A non-numeric value encountered in /home/riffyo5/public_html/wp-content/plugins/color-scheme-every-theme/classes/Options.class.php on line 108
 Q+A: The Trews Step Back to Being Stripped Down - Riffyou.com

Q+A: The Trews Step Back to Being Stripped Down

To many Canadian rock fans, The Trews are that band you can constantly count on. When you crack into an album of theirs, you know that it’ll be large, in charge and filled with moments worthy of private air guitar sessions and public sing alongs. In concert, you can expect the music to thump you like a series of complimentary pats on the back and a performance that’s never less than full bore.

In 2009, The Trews recorded and released Acoustic – Friends & Total Strangers, showing fans and casual listeners alike that these maritimes rockers are a multi-dimensional threat.

Proving to be a significant moment in the career of The Trews, the band reissued the album on vinyl and are currently on the road performing a series of acoustic shows across Canada. Recently, Riffyou.com got in touch with vocalist/guitarist Colin MacDonald to discuss the album’s importance and the art of dealing back the electricity, but not the passion or intensity.

RY: Acoustic – Friends and Total Strangers is such a great listen! Why was now the right time to revisit it?

Colin: “Friends and Total Strangers is a special album, it was recorded live off the floor and we captured something really special. We always wanted to release it on vinyl so we figured now was a good time and it gave us an excuse to do some more acoustic shows, which are always lots of fun.”

RY: What do you remember about those January 2009 sessions that led to the album’s creation?

Colin: “We weren’t planning on making a record. We just recorded our two-night stint at the Glen Gould Theatre (in Toronto) and it just felt right. I remember feeling nervous the first night but settling into the groove on night two. People were pleasantly surprised with how good we sounded unplugged. I remember really needing to pee halfway through the set; cause we weren’t moving around and sweating out the pre-show drinks.”

RY: At the time, how much of a desire was it for The Trews to show listeners that you could dial back the big rock sound and still succeed while stripped down?

Colin: “We were always naturally good at singing together. Breaking everything down showed people that we had talent and we weren’t just a radio rock band. I love being on the radio, but it’s nice to show people that we’re real musicians as well.”

RY: Are you a believer in the notion that any musician worth his salt should be able to play any of his songs acoustically?

Colin: “Yes, the only test of a great song and a great band is how well they can do it in real time. There’s too much quantizing and fixing these days. What’s cool about Friends and Total Strangers is that it’s all live; there were no overdubs or auto tuning.”

Colin: “It teaches us to be more dynamic. It teaches the listeners that there’s more depth to ‘Canada’s 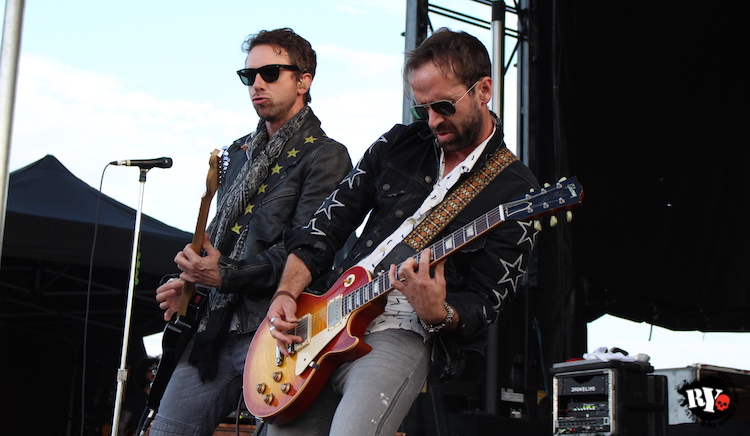 hardest working bar band.’ It’s a great opportunity for us to switch gears and get better as a band.”

RY: How is the mindset and preparation for an acoustic show/tour different from when you’re doing the rock spectacle?

Colin: “We don’t really rehearse for tours; we’re always working on new material and are in constant readiness to play.”

RY: Some people think acoustic shows from a musician’s perspective are less intense than when a band does the full electric show. Is that just a terrible myth, or is there any truth to that?

Colin: “Our acoustic shows are pretty intense. I don’t like boring singer-songwriter type shows, unless I completely love the artist. We try to make our shows exciting for the diehards and even the most casual of fans.”

RY: “Which song of yours would you love to perform acoustically, but are maybe hesitant about stripping back? Or is everything fair game?”

Colin: “Everything’s fair game, we do a lot of our heaviest tunes acoustically just to see if we can get away with it. I’m particularly fond of our song ‘Gun Control’ stripped down.”

RY: It’s awesome that Friends and Total Strangers is getting the vinyl treatment! Is there a live album you have owned on vinyl that still blows your mind?

RY: What can you tell us about The Trews’ plans for a new studio album?

Colin: “We’ve recorded new songs for an upcoming greatest hits album. Jack, John-Angus and myself have been demoing lots of new material. Hopefully we’ll have a new full length in 2017.”