Warning: A non-numeric value encountered in /home/riffyo5/public_html/wp-content/plugins/color-scheme-every-theme/classes/Options.class.php on line 108
 Riff Rant: Sum 41 Frontman Lives to Put Down the Bottle - Riffyou.com

Riff Rant: Sum 41 Frontman Lives to Put Down the Bottle

In the history of rock n’ roll, there have been way too many stories of talented musicians vanquishing into oblivion thanks in no small part to 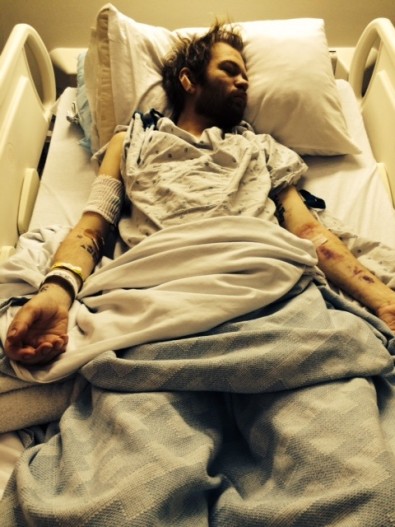 alcohol. For the moment, it appears that Deryck Whibley, the primary catalyst of Sum 41, does not want to be one those statistics.

Over the weekend, Whibley rattled music fans by revealing in a blog that for the past month he’d been laid up in a hospital bed after his liver and kidney collapsed thanks to years of alcohol abuse. He was unconscious and sedated for a week, and risks death if he were to have one more drink…ever.

I’ve been covering bands for about a decade and a half and have seen more than a few things. Let’s just say that recognizable musicians – like Whibley – can access booze as easily as you and I can access oxygen. Either they have the vast amounts of money to do it, or people around them willing to feed their need.

With that in mind, Whibley’s admission of drinking hard on a daily basis isn’t surprising. That said, the admission is an important step – as is the very public declaration where he admits to being scared straight and endeavours to avoid alcohol consumption from this day forward.

Riffyou.com would like to encourage Whibley to stay upon the new path he is hoping to walk down. There’s no way to believe that sober living will be an easy transition for him, but his message of seeking change sounds legitimate.

Yes, we’ve heard this song and dance from more than one popular musician in our lifetime, but rarely have they let us into their saga in the way that Whibley has. The photos of him physically beaten down in a hospital bed are chilling…but he still chose to publish them as quickly as he could.

While he states that he doesn’t want to preach and force people to drink responsibly, he has put himself out there as an example of what can happen when you don’t.

Whibley’s very lucky to be alive today. Had his fiancé not been nearby when he collapsed at his home, this could very well have been yet another alcohol-related artist obituary. We are happy that it isn’t.

It takes a hell of a lot of courage to throw this type of vulnerability out there in this era of TMZ and online gossip. We’re just glad you were able to tell this story first.

Deryck, if this article somehow finds you, know that we got your back and wish you the best.