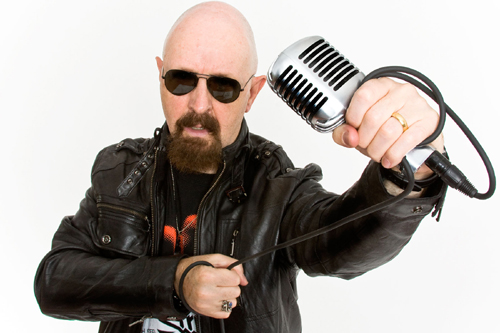 In 2007, one of the featured speakers at Toronto’s NXNE Music Festival and Conference, was none other than Judas Priest frontman, Rob Halford. Thanks to a friend on the inside, I was granted a pre-event conversation with him.

As I spoke with the voice behind one of the pioneering bands of heavy metal, I had a deep curiosity regarding how a band goes about developing a sound that didn’t previously exist. Here is my conversation with the great Rob Halford.

AG: Looking back at the decades you’ve spent within the heavy metal world, are you amazed that you’ve made it this far?

Rob: “It is when you look at the unfortunate, tragic stories in rock n’ roll – you know, the crash-and-burn syndrome and so on and so forth. I do count my blessings that I’m here over three decades later. I’ve been around the world so many times I can’t remember. I’ve done thousands of shows that tend to blur around the edges, and I’ve seen metal grow from its roots back in the Midlands in the UK, to this really broad-based display of all different styles and formats – it was really exciting to watch all of that develop. Just to see that there’s still strong and important and valid metal in 2007.”

AG: What do you think when people consider you as such a huge influence on metal?  Because I guess back in the day there wasn’t really much to go on when you were starting out.

Rob: “No, there wasn’t really. Priest and probably Sabbath were at the forefront of inventing this style of music, so we didn’t really have any other metal bands around us for inspiration and influence. I mean, there were other strong rock acts – whether it was the obvious ones like Led Zeppelin, or what Hendrix was doing, or what Clapton was doing in Cream – which was strong music, but it wasn’t definitive in terms of the metal sound. Those were three bands that I would look at and listen to and get excited by, but everything else was non-metal in the true sense. It was kind of a ‘do it yourself’ type of scenario to find a way and make this sound happen.”

AG: How do you make a sound happen that hasn’t been conceived yet?

Rob: “Even now, it’s about the players that you are with and the definition of the music that they want to send out. I believe that the strength of all metal bands come from what the guitar players are doing. Whether the guitar players are leading with the riffs or the chugging and the combination of those elements with that real specialized rhythm; percussive section from your drums and bass – it all comes from that. Wherever I put my voice, it has to have a real metal foundation.”

AG: Along with the band, you also have to have the person out front to sell it to everybody. How did you develop that unique, high pitch singing style and appearance on stage in a landscape that was so new?

Rob: “When I was a kid at school I was involved in a lot of choir performances and took part in a few of the stage presentations that you do as a kid in school. I just found that really attractive, but the voice was something that I just got – must’ve been in the family gene pool I guess. As far as developing [my voice], I was in a bunch of relatively unheard of 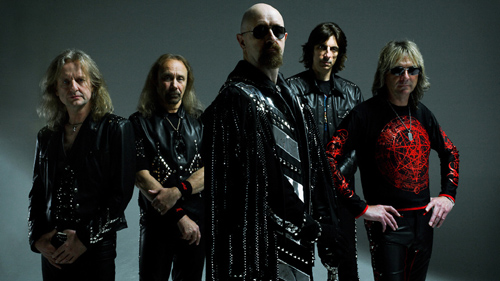 semi-pro bands in the Midlands that weren’t real metal bands, that were very rock-blues, progressive-rock styles of music. But I was able to experiment, and try and figure out what the voice could do.  It really wasn’t until I got with Priest that I was able to nail it and get it focused.

“The theatrical thing has always been in me – I love to see a show, I love to see exciting things happen on stage, so that was just another area that we in Priest developed over the years. Once we got the imagery with all the leather, I just took that to whatever level I could. Now it’s really a part of the event when you see Priest – you expect to see all of that spectacular visual stuff going on.”

AG: It’s interesting how accepted that’s all become especially when you think about the days where metal music scared people.

Rob: “Yeah, but that’s just the way the music business should keep evolving as far as what’s coming forth from different areas of the big statements of rock n’ roll. Today’s world of metal is so diverse…you’ve got multiple choices to figure out – if you’re a young metal head and you’re getting into it for the first time – you can go to many different places to find out what works the best for you.”

AG: Do you remember when metal began to transition into a form of music that the public could accept as it was?

Rob: “I think British Steel is a pretty good record to use, because that was 1980. A lot of people when they look at Priest, they cite Sad Wings of Destiny as being a very definitive moment for the style and the metal of Priest. After that we had Sin After Sin, Stained Class, Killing Machine, but by the time British Steel came along, the work I was doing with Priest was secured on a global, international level, which put us in the scenario now that when we go on world tours, it takes 18 months to two years to play to everybody, because Priest is a phenomenon around the planet and everybody wants to see the band play.”

AG: What is it like to be a part of such a phenomenon?

Rob: “You have to keep your head secure – you don’t let anything inflate your ego or change you as a person, which is something that I have witnessed in certain players when they hit a level. It can be very difficult to cope with – that’s when you have the drama and the tragedy sometimes, so you just have to stay focused.

“When you become successful – whether you like it or not – you have to become responsible because you have a fan base that is supporting you and you answer not only to yourself, but to them; and criticism is part of the game. When you’re in this arena, if you can try and remain as basically straight-forward and honest as you were when you kicked off, I think that’s a great help. It’s a great foundation to keep your ego in check.”

AG: Did it help that when Judas Priest started up, you guys really had nothing to lose and success was a bonus?

Rob: “Oh, I agree. We worked our balls off, and we still do now. We had nothing going for us, but the music – when we were in the band together, we liked each other’s company, we were making music that nobody else was doing, and that’s 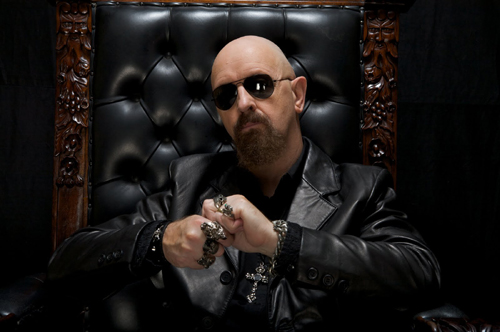 what really started the whole metal ball rolling. To some extent, that’s the same as it ever was – I don’t think any of us have changed that much in Priest.”

AG: Do you look at metal now and how it’s evolved since Priest came out and think, ‘wow, this is in-part due to us?’

Rob: “That’s a fact; I mean you don’t dwell on it. It’s a great joy to think that you’re part of the roots of metal and even all this time later, you have something valuable in terms of inspiration to offer. You don’t really think about that until you meet the players and they say, ‘I saw Priest when I was 13 or 14,’ or ‘I got my first Priest album in my teen years and I decided that’s what I wanted to do.’ That’s a real kick when people make that kind of statement.”

AG: Are you comfortable with that ‘legend’ tag that must greet you every now and then?

Rob: “I am when I’m in this world – like when I’m talking to the press or I’m on tour – but I just find it very uncomfortable when I’m in my downtime, walking around and I get approached. I mean, I’m a really approachable guy, but it’s sometimes, ‘yeah, you’re the Metal God, you’re this legend!’ And I’m like, ‘Yeah, okay.’ I don’t really look at it as that much of a big deal. I respect what it represents, but I’m a regular guy like everybody else in a lot of conditions.”

AG: I guess you also have to turn off that rock persona now and then for your own benefit.

Rob: “You’ve got to. I know when to get off stage, some players don’t.”

AG: When did the “Metal God” term first get bestowed upon you?

Rob: “I don’t know; the fans started to call me that.  We had this song called “Metal Gods” from British Steel – which I never really thought about (but) it was just a really cool song title (we came up with) when we were making that British Steel album in John Lennon’s old house in London. I guess it really just stuck with people and I can’t recall the first person that said, ‘hey, what’s up Metal God?’ I didn’t really think much of it. It’s just a term of affection – some people in sports or the movie world or the music world have a nickname. I’m the ‘Metal God,’ cool.”

AG: Do you feel that that’s a title you have to live up to?