Tour Diary: The Penske File Do America (and Canada too!) Pt. 1

Travis Miles here from Burlington, ON-based band The Penske File. For those of you who don’t know, we play a folk-infused 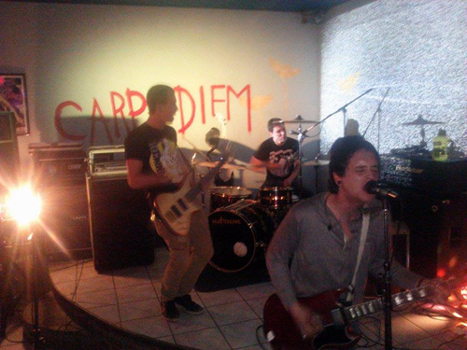 blend of melodic punk rock, and have recently embarked on our first (legitimate) American tour. I will be updating my firsthand accounts of our travels here at Riffyou.com through a series of blogs, photos, and run-on sentences. If that tickles your fancy, read on.

Booking a tour is a funny thing — when it turns out relatively as planned. While bustling along innumerable highways, I can’t help but revert to the overhead satellite view I was looking at three months prior while conspiring this undertaking. Now we are here on the I- 75 towards Flint, MI, and as the sky clouds over, it bears no effect on my morale.

We left our home in Burlington, ON, on Tuesday, April 22, and played our first show in Windsor, ON, that night at Milk Coffee Bar. Thrown together by a friend of ours, the show was surprisingly great for a Tuesday night, and saw us playing to a nearly packed house of wide grins and tapping limbs.

Directly after the show, we packed up and drove a few blocks to the Detroit-Windsor Tunnel. After an uneasy, yet totally successful

hour of processing at the border, we were in America for the first time as a band … legally. We jetted over to the Garden Bowl, where our good friend Matt was working, and waiting for us with a pitcher of ale. We got to the bar just as last call was approaching, hugged it out, gulped down our pitcher, and went back to his house to crash out on the floor.

The next night, we played in Detroit at a very cool ‘nam vet/punker bar called the Old Miami. The turnout was modest yet inviting, and we got to share the stage with an absolutely rad band from the city called The Cheapshow. After our set, we piled in the van and headed across town to a local spot called Smalls Bar. We spent the next hour drinking ridiculously large cans of PBR, and marvelling at our physical incompetence as our pal and tour manager Dallas performed some lengthy headstands on the bar top. We left (got ushered out of) Smalls at a 2:45am, stumbled to the van through raucous laughter, landed at Matt’s house in the wee hours, and passed out on the floor again.

Now, as I’m finishing up this entry, we are edging into Flint, MI, which will be the third stop on our month long blaze across America’s Midwest and Northeast, as well as Ontario and a stop at Montreal’s Pouzza Fest. Keep checking back for more updates and I’ll keep writing.