Warning: A non-numeric value encountered in /home/riffyo5/public_html/wp-content/plugins/color-scheme-every-theme/classes/Options.class.php on line 108
 Fan Review: "Chills," the New Down With Webster Single - Riffyou.com

Fan Review: “Chills,” the New Down With Webster Single 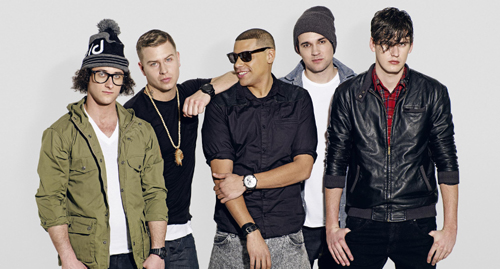 Canadian rap rockers, Down With Webster, recently released their latest single, “Chills,” on Tuesday December 17, 2013, kicking off the promotion of their newest album, Party for Your Life, set to hit stores and iTunes in early 2014. This release also helps in announcing their winter tour – known to fans as “Wintour” – which kicks off in Vancouver, BC, on January 29, 2014 and ends in Montreal, QC, on February 14.

The new single is sure to impress long time DWW fans, such as myself, and captivate new fans as it features the band’s signature and classic rap verses by members Cameron “Camm” Hunter and Martin “Bucky” Seja: equally catchy beats and lyrics are here as well.

Unlike their usual upbeat and fast-paced hits, Down With Webster slows it down for “Chills,” with lead singer Patrick Gillet hitting those higher, sweet sounding notes that he undoubtedly perfects the song with. For any DWW fans, this new release is sure to get you pumped and ready to join the boys on tour this winter, where I’m sure you’ll get a sneak peak at some tunes off of Party for Your Life.

To get fans even more excited for “Wintour,” Cameron Hunter, rap vocalist and member of DWW, released a freestyle video all about the event, featuring tour mates Son Real and D-Pryde.

This time around, the band is offering special VIP and ‘meet and greet’ treatments where fans will be able to grab some pizza with the band, attend their soundcheck before the show and receive a pre-show telephone call from the band. I’m not sure about you, but this sounds pretty exciting to me!

This is sure to be an exciting time for member Cameron Hunter, who on top of all of the Down With Webster happenings, also released a solo mix tape titled Just Me, which captures his pure talent as a lyricist and rapper.

Check out Down With Webster’s new single “Chills” on iTunes now, and don’t forget to go online to watch their performance at MuchMusic’s Big Jingle.

Previous: Interview: The Creepshow Gets a Renewed Lease on Life
Next: Q&A: Devin Cuddy Branches Out from Family Tree