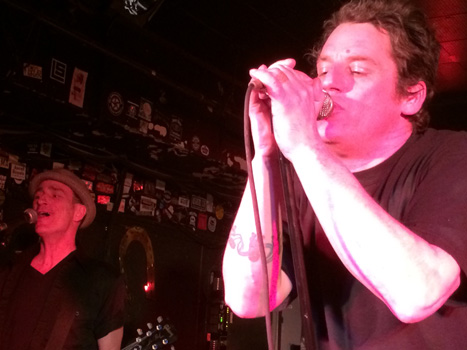 I was born in the early ’80s to Michael Jackson’s Thriller, but I was raised by late ‘90s alternative rock bands. Rusty was one of those bands and I had the opportunity to catch them for the very first time Saturday, December 28, 2013 at the legendary Horseshoe Tavern in Toronto, ON.

If you have never been the Horseshoe Tavern – and until yesterday, I had not – it is a great place to catch a live show. Though the washrooms leave something to be desired, VERY desired, the venue is quaint and rustic, featuring a checkered dance floor and a seating area with long benches, similar to a picnic table.

The seating area was full by the time we arrived for the 10:00 pm start time, so we found a ledge to rest against. I want to admit up front that I have not been to a “bar show” in many years, and did not remember the late starts, and obviously late finishes. As a now 30-year-old, I was expecting to be utterly exhausted by the time Rusty hit the stage, likely sometime after midnight.  However, when the first opener, TimeGiant, started the show, all thoughts of a nap evaporated.

TimeGiant were very loud, very energetic and very engaging. The first song got the crowd bopping their heads, stomping their feet and pumping their fists. At one point, the singer even brought out the saxophone for a couple of songs! Although I had never heard of TimeGiant before last night, they clearly had some fans there, following their launch party of their most recent album a couple of months ago at the same venue.  By the end of their set, everyone in the place was hooting, hollering and lining up at the merch table to buy their 3 CDs, myself included!

The second opener for Rusty was the (mostly) girl pop rock band Tuuli. The set started a little dry, but Tuuli quickly warmed to the very receptive crowd. Though not quite as hard as Time Giant or Rusty, Tuuli was a nice, sweet, pop-rocking centre to the two hard rock band cookies at either end of the show.  People steadily filtered in to the Horseshoe Tavern, and though many may not have heard of Tuuli before, they made their way to the dance floor. The band’s singer actually made a little joke of it: “Here is a new song. Well, I guess these are all new to you, unless you knew us from before,” perhaps referring to the fact that most people in the audience were there for Rusty. I was not all that familiar with their music, but when their single “Summer Song” began, the high energy of the guitar riff kept me on my feet, shaking my tush.

Once the headliners Rusty took the stage, the crowd was already very warmed up, and responded with a resounding roar in appreciation of seeing a band that has been relatively silent since the late ‘90s. Not a single person in the crowd was still sitting by the time the first note of the first song, “Groovy Dead,” was played. It was great to hear the crowd sing back the lyrics to all the songs, all these years later, even louder than the band themselves. After the long wait, Rusty did not disappoint. They played all the hits their fans came to see, including “Soul for Sale” (my personal favourite), “Misogyny” and “Empty Cell,” the song that “skyrocketed to the middle of the charts to make them earn dollars and cents” (lead singer Ken joked). A few rowdy but well-meaning fans in the front of the crowd engaged Ken and the guitarist, Scott, in some banter between songs. References were made to other late ‘90s music scene staples such as the Tea Party, Glueleg, and Sook-Yin Lee (formerly of MuchMusic).

Even though Rusty has not put out an album since 1998, and have only recently started performing again intermittently, they were cohesive, entertaining and appeared to have a fantastic time on stage.

I am hoping they become a post-Christmas staple at the Horseshoe Tavern so I can get my late Nineties alternative rock on at least once a year. Merry Christmas to me!