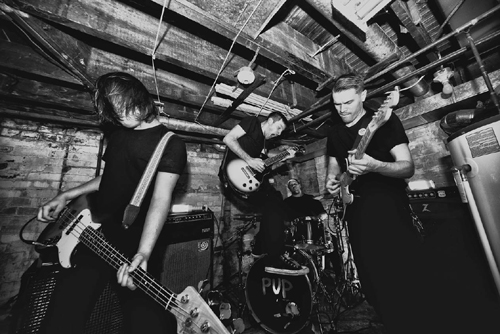 Toronto-based punk quartet, PUP, has become the latest Canadian rock band to make waves beyond their own borders. They’ve been boasted about by international press, and this spring will re-release their Self-Titled debut album worldwide through SideOneDummy Records.

Tonight, the guys play a sold out hometown gig at The Garrison before heading to Europe and the US for a big chunk of dates. Ahead of that, we connected with PUP frontman Stefan Babcock to learn about how the band is handling their rise, as well as to have him answer five really important questions.

What is your favourite place to play a guitar?

“The bedroom. I’m a bedroom kind of guy. I just like to be alone and in a space that I’m comfortable with…usually smoking a little bit of weed to get the juices flowing.”

“Anything except for burritos. Actually, no Mexican or Indian food before shows – that’s the hard and fast rule we have.”

“Fidlar’s Self-Titled. It’s the most fun record that I can think of. It’s surf punk. The guys are so snotty and sing about getting wasted, and fucking up with girls. It has fun songs that are really catchy and it’s so easy to feel good while listening to it.”

“I’ll go with Built to Spill. I love their songs. The lyrics are incomparable and the whole aesthetic of them kind of sucking at playing their instruments, but not having that be what it’s about [is great]. That band has made me, more than any other band, really love music and make me want to do this with my life.”

“My mom! Yeah, my parents are great. They come out to all of our Toronto shows and are very supportive. I love having them there!”

Previous: Getting to Know: Toronto-based Punks, The Bare Minimum
Next: 20 Years On: A Look Back at Green Day’s “Dookie”