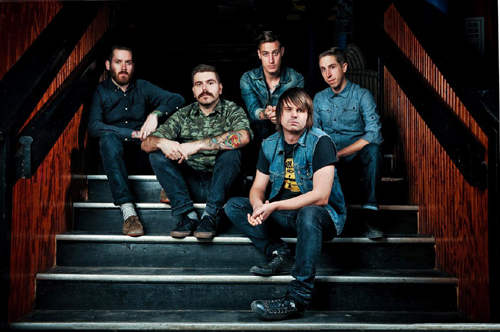 It’s been nearly 14 years since post-hardcore/emo band Silverstein emerged from the small, yet on the rise music community of Burlington, ON. The group has since released a half-dozen full-length albums, including 2013’s This is How the Wind Shifts.

While on tour in Quebec in January, Riffyou.com managed to present band vocalist Shane Told with five very important questions. Here is how he answered them:

What is your favourite place to sing?

“I always sing in my car. In fact, when I first started out with the screaming thing, I used to practice screaming in my car because nobody could hear me – I wasn’t worried about someone in the next room [listening]. But, I got some pretty funny looks from other people driving and seeing me screaming at the top of my lungs.”

“We’re all vegans and vegetarians, so anytime we can get some good local vegan stuff, that’s the best. Like, some kind of a vegan chicken sandwich would be perfect.”

“I always go back to this album by Lifetime: Jersey’s Best Dancers. It’s a record that I can listen to whether I’m happy or sad…it doesn’t matter, because it’s that perfect record. Afterwards, I always feel good.”

“I’m pretty inspired by Pedro the Lion and [their frontman] David Bazan. He’s grown with me musically from when he first started putting out music, to his latest [offerings]. He’s taken me from my youth to my adulthood, and I guess he’s gone through the same things as me. That’s a special artist to me.”

“Probably my parents. They’ve been ridiculously supportive of me playing music since I was a little kid. My dad plays a little bit of guitar too, so I think he’s living his dream through me sometimes. It’s really nice to have supportive parents.”

Previous: Getting to Know: Pittsburgh Hardcore act, The Author, The Perfecter
Next: Q&A: Ex-JUNO Judge Petitions Nomination for The Flatliners