In an era where selfies have become as crucial to some as breathing, it’s refreshing to see a band ditch the idea of plastering its 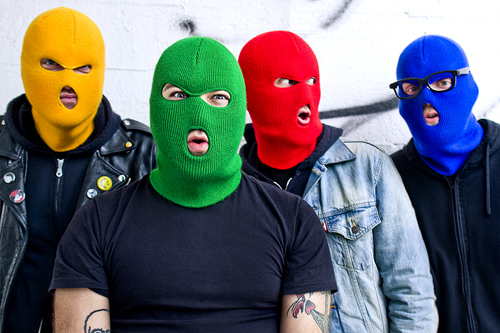 Looking like a badass incarnation of the Power Rangers is Masked Intruder, a four-piece pop-punk collective that’s sound is far more fun and lighthearted than their coloured ski masks would suggest.

“A lot of bands these days are pretty serious,” offers Intruder Blue in an interview with Riffyou.com. “Not that there’s anything wrong with trying to be political or share your beliefs, but I think people enjoy coming out to a show or listening to a record and not have to worry about being preached to or have stuff thrown in their face.”

Released on May 27, M.I. is the second album from this collective, one that Blue views as a definite evolution from their Self-Titled 2012 release. With the “better than expected response” to that one, Blue admits that the guys had to up their game this time around. The end result, he believes, is an album that’ll live up to fan expectations and show off Masked Intruder’s growth as musicians.

Despite the band’s interest in honing its sound, there are still those questions out there about who the hell the band really is. Riffyou.com had to ask, and subsequently didn’t get that answer. We weren’t surprised by this.

That said, Blue let us in on some of what he hears from others:

“People do ask a lot about whose under the masks. ‘Are you Teenage Bottlerocket? Are you Green Day? Are you Weezer?’ We usually say ‘yes,’” says Blue. “The most ridiculous one was some kid on the Internet saying that we are the Ramones. Most of those guys are dead, so… We could be the ghosts of the Ramones, but that would be pretty spooky.”

Sonically, though, those could be fair comparisons, which is why it is challenging to believe that Masked Intruder can’t shake the ‘gimmick band’ title that’s been tossed upon them. Yes, the masks can be considered gimmicks, but we all know the likes of Kiss and GWAR have musically pleased others for years regardless of which extra-curricular wardrobe they are wearing.

“The most important thing for us, and probably most other bands, is to focus on the music,” contends Blue. “Sometimes people will hear about us and go ‘oh, yeah, whatever, a band with ski masks.’ They think it’s just a gimmick and expect us not to have good music because they figure that gimmick bands don’t [make good music]. We try to focus 100% on the music, and 100% on 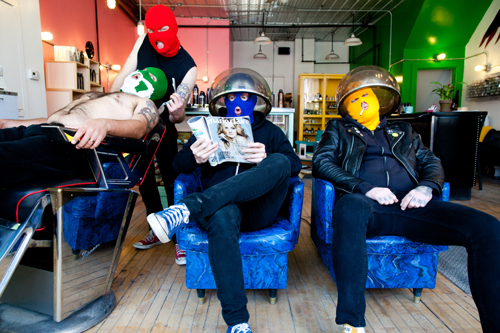 “It doesn’t really bother me,” he adds. “I feel if people listen to the music and they don’t like it, fine, but if people give it a shot, they’ll probably find something about it that they’ll like.”

As for whether or not the band would ever consider the idea of going mask-less down the line, don’t count on it. Blue believes, as many would, that making such a move would contradict a well-executed dynamic of the band.

However, Blue is a hot-blooded male, so of course there is one particular person that could talk him out of his mask-on lifestyle.

“I guess you could never say for sure,” replies Blue when asked if he would ever lose the mask. “Like, what if tomorrow Katy Perry said ‘hey Blue, I’ll make out with you, but you have to take off your mask.’ I would do it. I’m not going to lie. I would do that. Barring some fantastic circumstance like that, we would never do it.”

Previous: Tenth Johnny Ramone Tribute Event Happening in August
Next: Q&A: Jolie Holland – “I’m well on my way to dying in the gutter”