Let’s Get Digital: Inside the hmv Mobile App 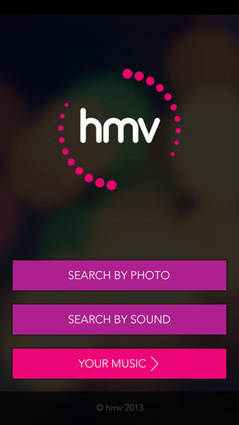 With not every album out there able to be a solid piece of art from top to bottom, it makes complete sense that hmv Canada attempts to prepare its customers the best it can with its new mobile app for iOS and Android.

Having debuted about two weeks ago, this new digital entity by the music, movie and pop culture collectibles retailer has a pair of highlighted features geared towards discovery: image search and sound search. The former allows a person to scan an album cover with his phone’s camera to pull up 30-second previews of each track upon it. Meanwhile, the latter function acts like song-identifying app Shazam, making it able to identify a song title and the artist performing it by holding the mobile device within range of a speaker.

That Shazam-esque feature may prove to be the most interesting inclusion in this app, seeing as, well, many, many music aficionados likely already have downloaded Shazam and don’t need something similar. Nick Williams, President and CEO of hmv Canada defends the inclusion of this element.

“In some ways, Shazam has probably helped our thinking,” admits Williams. “People are already using Shazam and understand the feature. But, the added advantage of being able to visually recognize a CD in store allows you to very seamlessly link into the digital side to make a purchase.

“It’s arguably a gimmick,” he continues, “but I think it’s functionally sound enough for people to actually want to use it.”

The “digital side” that Williams mentions is hmvdigital.ca (My hmv), a spot in which a person is capable of purchasing MP3s. Android users can take full advantage of this feature while using the app, but since Apple has some pretty rigid rules regarding how third-parties can sell certain commodities through a designed-for-iOS app, this feature is not available for those with an “i” device. Instead, these “i” users have to download their music through the hmvdigital.ca website, but can then stream them through the app. 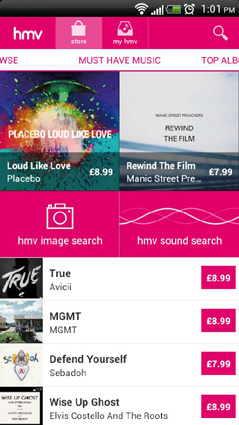 “At some stage, we’d like to think that we can combine a purchase of a physical and digital product together,” believes Williams. “This is more of a longer term view that allows us to combine the assets of what we’re doing in-store and what we’re doing online. Whereas up until this point, they’ve been very separate businesses, and to some extent, that’s been appropriate. We’ve recognized over time that we really need to start leveraging not just the online presence of what we’re doing, but also the in-store presence.

He adds: “Look, we can sell these products in-store, but I think if you add features to that, it makes a big difference for people.”

While the enthusiasm for the app is present in Williams’ voice, the product is still in its infancy. He says that while he was very pleased during the app’s testing phase that it was able to provide information related to releases from a range of regions, he does note that adding more and more albums to the app’s knowledge base will be a continual work in progress.

That said, optimism is in the air for Williams and Co., as he sees this new high-tech endeavour by his company as the right move at the right time.

Previous: Interview: Buckshot Bebee and The Secret Boyfriends Get Fashionable
Next: Riff Clip: Happy Holidays from RiffYou & The Trews!