Q&A: Perfect Pussy Gets in Your Face with New Album 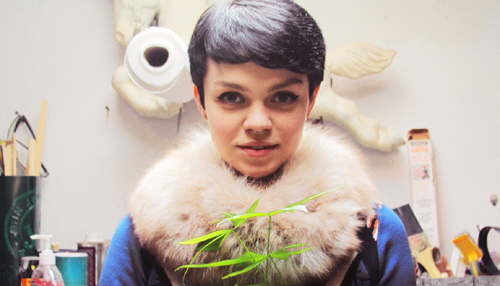 Hearing the name Perfect Pussy can’t help but stop someone dead in their steps. It’s provocative, in your face, and without the slightest bit of subtlety attached. Essentially, it describes the presence of this Syracuse, NY, noise-punk quartet insanely accurately.

Last year, the group – Meredith Graves, Garrett Koloski, Ray McAndrew, Shaun Sutkus, and Greg Ambler – abruptly arrived on the scene thanks to a critically acclaimed four-song cassette, I Have Lost All Desire for Feeling, which is as relentless as it is fast and to the point. The release landed praise and band-backing from the usually hard to please folks at Pitchfork, while Rolling Stone dubbed it as one of the “27 Best Albums You Didn’t Hear in 2013.”

Currently, Perfect Pussy finds themselves racing down highways to get from gig to gig, as the calendar moves closer to the date in which their full-length debut, Say Yes to Love, reaches the street. Available on March 18 through Captured Tracks, this album features the forthright first single “Driver,” while those who grab SYTL on iTunes will be given a collection of bonus live cuts.

Ahead of the band crossing the border into Canada for a January 25 appearance at Toronto’s Silver Dollar and Montreal’s Casa del Popolo on January 26, we managed to sneak in some time with Perfect Pussy’s refreshingly forthcoming frontwoman, Meredith Graves.

RY: Congratulations on getting Say Yes to Love ready to go! “Driver” sounds awesome, but what can people expect from the album as a whole?

Meredith: “I’ve been explaining it to people as ‘just as bad, only slightly longer [than the demo],’ which started as a joke before I realized it was totally accurate. More songs about sex and hatred, I guess!”

RY: Coming into this album, what expectations did you have for yourselves artistically? Do you feel as if you met them, or exceeded them?

Meredith: “The best thing about this band is that we don’t waste time thinking about things like artistic expectations. At our core, we’re still fundamentally a punk band (or at least, a band comprised of punks), so we go into projects with wildly low expectations. We wrote and recorded the record in about a week, which prevented us from doing anything too stupid or contrived. However, I’m proud of it. It’s not perfect – I wish we’d have had more time to experiment, but I’m notorious for being hypercritical of everything I make, and painfully anxious about reception. By going so far as to make a full-length at all, we’ve already way exceeded our expectations for this band.”

RY: The title Say Yes to Love is one that a person could believe means something very specific to the band. Could you please elaborate on where that title came from and how it represents the album (or the band) as a whole?

Meredith: “It’s actually a fragment of a longer lyric, like the demo. I realized recently that SYTL is essentially a breakup record – all the songs orbit a very intense and meaningful relationship of mine that ended last year…it failed in very painful ways. The song I robbed the title from is about my getting older and watching my close friends get married and have children, and meanwhile I’m getting dumped by the person I thought I might have done those things with eventually. It made my hair stand up when I thought about the punks, the anti-establishment types, the ones who are ‘supposed to know better,’ conforming to standards of marriage and family…and then I realized that I’m little more than a jealous asshole who felt completely slighted and self-conscious and miserable about my failed relationship. I wrote a song about how embarrassing these complicated feelings were to me. The whole lyric is actually “since when do we say yes to love?” 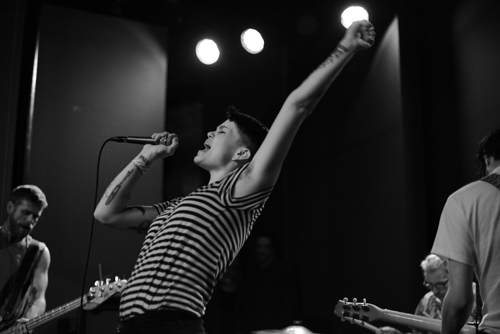 RY: Your four-song demo sure received a hell of a lot of praise – how did the band deal with the onslaught of attention/praise/critique?

Meredith: “By carrying on in much the same way we had been. It’s nice when people like your band, it really is, but getting great reviews doesn’t prevent you from shit-talkers. It doesn’t guarantee you piles of money, or fix your health, or your relationship with your parents. It doesn’t make you perfect or absolve you of critique or the need for self-improvement. We have totally enjoyed it. I don’t want to sound like a total dick, but our way of enjoying our ‘success’ was to use it as an excuse to tour for eight weeks straight, which is all we like to do.”

RY: During the whirlwind you’ve certainly experienced of late, how often have you sat back and thought, ‘whoa, we’re just a young band – people need to chill out”?

Meredith: “I don’t think that ever, at all. I’m wholly grateful for every person that listens to the demo, even the people who hate it. I get so stoked on new bands…I think a lot of people do, the turnover in punk is pretty fast and new bands pop up all the time, so caring about a band that only has a demo out is a familiar condition.”

RY: Amidst the hectic schedule and pressures that come along with being in an up and coming band, how much more important do you think your friendships with each other will become as this band moves along?

Meredith: “Well, we’ve been on tour for two months so right about now I’m just thankful there haven’t been any fistfights. It’s funny, though, because no matter how tired of each other we inevitably get, there are no other people on the planet I would rather be doing this with. We can get in all the pissing matches in the world and it’s always over nothing – fundamental disagreements over serious things aren’t a problem with us. We fight over every stupid small thing, like someone’s penchant for foul-smelling potato chips, or who drank up all the DayQuil, or who needs to be reminded to shower. But, our allegiance to the big things is what makes us a weird little family.”

RY: The Internet now seems to be a place where bands can be made or broken more than anywhere else. How crucial has the Internet music community been to the emergence of Perfect Pussy?

Meredith: “There’s only one correct answer to this and I’m not going to casually pretend I don’t know it. The internet is the only reason people know about this band. When people discovered the demo, we’d only played a handful of shows. People from all over finding out about the demo is the only reason we could tour the country for two months. Without the internet, none of this would have happened. We’re very lucky.” 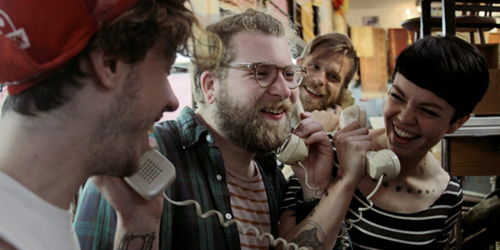 RY: Much has been made about your deep, heartfelt lyrical workings being somewhat buried within the noise/punk rock sound you’ve honed in on. Do you like the idea of getting people to dig deep into the tracks to pull messages from them? Would you like to eventually push them out more beyond the instrumentation?

Meredith: “This record is a little cleaner, in terms of vocals at least, and that makes me paranoid because I don’t like my voice. But I write the lyrics I do for a reason and I never had any intention of burying them for personal reasons. I just don’t like my voice so I beg Shaun to drop it in the mix.”

RY: I’m sure you’ve answered the “meaning of your band name” question a lot, so let’s spin this subject a different way: what is and/or who has offered the biggest criticism of the name Perfect Pussy that you’ve heard?

Meredith: “Two very important women in my life – my boss of the last four years, and my mother, both women in their 50s – both hate it and think it’s totally embarrassing and gross. I’ve tried to explain my motivation to both of them, and they have basically the same response, which is that the average person doesn’t want to listen to me and will likely see it as an attention-seeking gimmick. I think that’s a totally valid critique, especially coming from two extremely strong, smart women.”

RY: When 2014 closes out, where will the story of Perfect Pussy be?

Meredith: “Hopefully still living in a cargo van and arguing over smelly chips. But if this all ended tomorrow, I wouldn’t care. We’ve been so lucky and it’s so weird to all of us that this is even happening, so I’m sure none of us would be shocked if it all disappeared as fast as it came.”

Previous: Comeback Kid Release Video Teaser for “Die Knowing”
Next: Getting to Know: PA-based Pop-Punkers, Wings to Save