Warning: A non-numeric value encountered in /home/riffyo5/public_html/wp-content/plugins/color-scheme-every-theme/classes/Options.class.php on line 108
 Riff Redux: Ian MacKaye of Fugazi Screws with the System - Riffyou.com

Riff Redux: Ian MacKaye of Fugazi Screws with the System

In 2007, Ian MacKaye was coming to Canada with his new two-piece band, The Evens. At the outset of my dealings with 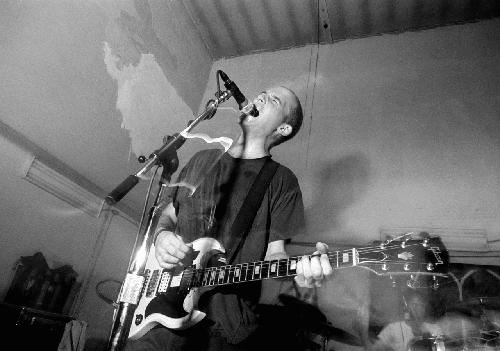 the founding member of Minor Threat and Fugazi, it became evident very quickly that he was a different cat – in the best kind of way.

Any kind of walls that are usually placed between artist and interviewer were immediately torn down, and what soon came to be was a very passionate conversation with a man aware of his legacy, but not always interested in taking advantage of it.

We pick up the conversation with MacKaye referring back to a question I asked him earlier in the interview regarding whether he takes advantage of who he is to get gigs for his new project.

As you’ll be able to tell, I didn’t need to say very much.

And so we begin:

Ian: “[Adam], one of your first questions was relating to if I’m desperate (to book shows) do I tell people I was in Fugazi? This has a lot to do with the psychology of our society. The way that people think about fame or celebrity-ism, or whatever, they basically [think] that I’m surfing on my celebrity-ism, but the fact is that I’m well aware of it. Don’t forget, before Fugazi, I was in Minor Threat and I don’t run away from it, or try to hide it – I don’t mind talking about it – I’m not ashamed of it, but at the same time I’m really thoughtful about the idea of using those things as solely a way to advance or advocate my current work.

“Essentially I use a metaphor – this goes back to when I was first playing in Fugazi and people were like, ‘why don’t you talk about Minor Threat? Why don’t you put Minor Threat on the flyers?’ The reason was that I thought about it, if for instance what I had done – at that time Minor Threat – if I used that as something that would pull us along, like a horse that might pull a carriage, that’s fine, but at some point, the horse will die and it’ll become irrelevant. Then, you have to drag it around with you if you’re actually tied on – then the carriage has to pull the horse.

“Do you know how easy it would be for to put together a rock band with some dudes and play some clubs?  It’s a no-brainer – that’s so easy if I was to use [my past]. But, that would be a one-time shot. People would come and see the show, it would be kind of lame and it’d be like, ‘I saw that.’ If you do something with The Evens, you fuck with the form. I mean, I want to be interested too – It’s not a job for me.

“This is my work and I’m engaged in it and I want it to be interesting and compelling and I want chances – I want experiences still to have the opportunity to occur; I don’t want it just to be predictable. If anything, Fugazi after 15 years

of touring, the fact that we were by and large practicing our work, my art, my music, my form of music in venues where the economy was based on self-destruction was deeply confusing and discouraging at times – it’s twisted. You’re a writer, right?

“Imagine if your writing could only appear in Soldier of Fortune (a magazine for mercenaries and professional soldiers), or a magazine that celebrates or promotes an agenda that’s antithetical to what you believe in, and even to your work itself.

“Don’t forget, that industry by and large convinced everybody in the world that the absolute, necessary component to music – I’m speaking about the alcohol industry – it’s a rues. I mean, that’s just the power of their lobbying – music was there long before any alcohol industry was, that’s for sure. They’ve got people so convinced that this a necessary component (to a concert) to the degree that bands have agreed to play shows where their own fans aren’t allowed in because they aren’t old enough to drink. That’s absurd and I defy anybody to say otherwise,” laughs.

AG: When you started out doing music, what point did you realize that “industry” was something that you needed to stay away from in order to sustain yourself and create what you wanted to?

Ian: That’s punk rock. Don’t forget, the first show I went to I was 17. At that time, the drinking age in Washington was 18…I was underage. I just wanted to see a band and I couldn’t go see the band. From the very beginning I was really aware. I’d tried to go see a show and I wouldn’t be able to get in and I thought, ‘Why?’ I didn’t drink. So, I think that was part of it – I just didn’t drink, so it was so obvious. To me, the injustice of it was clear.

“I wasn’t going to drink and technically in Washington – and this is just a weird little loophole in Washington D.C. at the time – but there was a law in the books that said bars weren’t allowed to have people under 18 in their establishment, but there was also another thing on the books that said anywhere that served alcohol must serve food, so technically they’re all restaurants. Restaurants could have people under 18.

“Because of the fact that the kind of penalties for not allowing minors into a restaurant were less severe than the penalties that were being handed out to bars if minors were caught drinking, they were like, ‘well, we’re just not going to let minors in,’ [because] it was easier for them to do it that way. Even though they were technically breaking the law, they didn’t care.

“I knew it was bullshit and it drove me nuts. I wasn’t going to drink and technically they had to let me in, but I couldn’t go to the shows,” laughs. So, I got a fake I.D.

laminated yet. It was funny because they actually had names on the cards and I had to buy it from him, of course – that was his racket. I paid him like 10 bucks and bought this blank naval sea cadet card and the name was Kirk Mullings. We took a Polaroid camera and I stood against a sheet – it was like me and [Henry] Rollins and this would’ve been June ’79.

“The Damned were playing this club called The Bayou and I fucking had to go to that show – I had to be there. Henry was a year older so he could go. So I just stood in front of the sheet, we took the photo, and we bought some plastic laminate crap. It was a really primitive job – two of us did it, me and this other guy Jordy.

“We went down to the venue with our fake naval sea cadet cards that said that we were 18 and the guy at the door was like, ‘we’re not going to accept this.’ I was just going to walk away because I was not going to put up a fight about it, but Jordy just said, ‘you’re not going to accept an ID from the U.S. military? And the guy was like, ‘ah, well…’ so we got in. But the point is that it just seemed so clear – my brother couldn’t get in, he was 14. He would just sit outside the back of the club and listen through the door and we were like, ‘fuck that.’

“Then Minor Threat started playing, and of course most of our fans were underage.  There were a number of shows that we got and [organizers] said it was not all ages, so we just packed our shit and left. I don’t play shows that aren’t all ages.

“It’s like dealing with interviews. It’s much more interesting to me to sit and contact you to set up the interview than have somebody else do it and just give me a list, like ‘be here at 4:15.’ I just want to live life; I want to experience all of these things. It’s much more interesting to be hands-on. That’s one of the great things about DIY’s – you actually get to do things; and talk to people; and be a part of life; and not just wait to be told what to do next.”

Previous: GWAR Management Issues Statement on Frontman’s Passing
Next: Getting to Know: Pop-Rockers No King For Countrymen