Riff Review: Mounties Kick it at The Casbah (w/Video!)

When Hawksley Workman spoke with Riffyou.com earlier this year, he couldn’t help but gush over how happy he was to 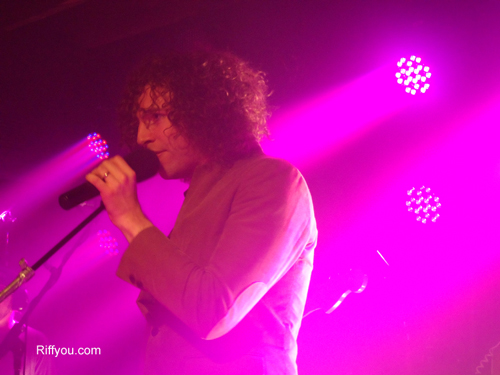 have Mounties be a part of his life. After a stellar night at The Casbah in Hamilton, ON, there are many more folks who now share that sentiment.

Comprised of Workman, Ryan Dahle (The Age of Electric, Limblifter), and Steve Bays (Hot Hot Heat), Mounties – whether the band likes it or not – first get viewed as one of those groups people like to refer to as super…strictly because of the sum of its parts. However, the trio, who just released their first album Thrash Rock Legacy on March 4, are actually super because of the sounds and chemistry being shared by the guys.

In front of the sold out crowd, Mounties rolled through a 12-song set that kicked off with “Pretty Respectable,” (see the video below) a bouncing rock that’s guided along by Bays’ sly synthesizer grace; Workman’s thorough drum beats; and Dahle’s roaming guitars. All three sing upon the track – which isn’t a rarity – but as a set-starter, felt like the perfect introduction.

“Hall & Oates” grooved all the way through as a way to steady the audience and give it breath, all the while encouraging the feet to keep shuffling. The masterful “The Twig & The Tree” featured gracious assistance from an audience member who was enlisted to hold up lyrics for Dahle, who wasn’t afraid to admit not exactly knowing all the words to this one. Could’ve fooled us.

Next up was Thrash Rock Legacy’s most beautiful song, “Waking Up on Time,” a smooth, atmospheric song seemingly about longing for what was, which can’t help but make you think about The Beatles.

For the remaining three shots of the set – “Minimum Effort,” “If This Dance Catches On,” and the latest single “Headphones,” the band flipped up to another gear and pushed even further into the audience’s ear canals. Workman got extra beastly behind the drums; while the sweat-drenched Bays and Dahle made the most of their one-foot-away distance from the crowd.

With the room really not built for an easy encore break exit, the guys merely joked about the hilarity of such a concert tradition, and instead went right into the last three songs of the night, which included the stripped-down “Latch Key Kids”; the prog-ish “Guaranteed Blonde Enough”; and an extended version of the hazy, but cool closer, “Tokyo Summer.”

On the second to last night of their first Canadian jaunt, it became clear that Mounties is not a one-off, vanity project by three guys who have already experienced many musical successes. They look, and sound like they’re in it for the long haul. There was absolutely zero focus on music from their previous projects, nor any real discussion about them.

Mounties are the real deal, and quite possibly one of the most enjoyable trios to emerge from the Great White North in quite a while. They’ve got the history, but they also have a very exciting future.

Previous: The Friday 5: The Five Best Nirvana Videos
Next: Getting to Know: Winnipeg Rockers, Dr Rage & The Uppercuts