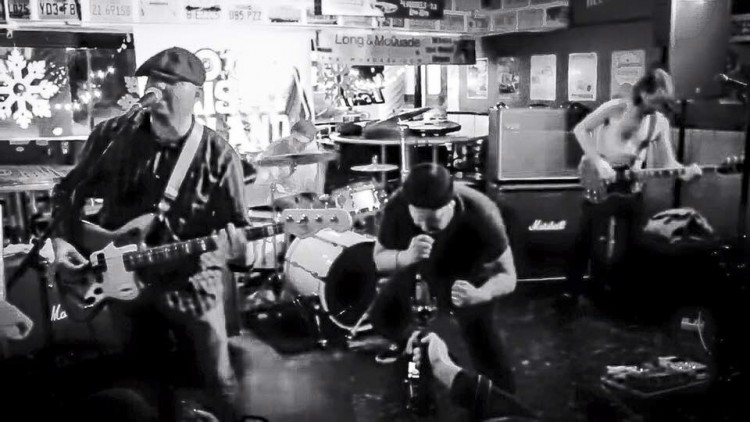 If any of these names appear familiar to you, it’s because they should. All four have been collectively active for more years than we have fingers and toes. Among their individual resumes, you’d find associations with wicked bands like Saint Alvia, The Video Dead, Say Yes, The Penkse File and Organ Thieves. And now, RULES has been added to the list – finally!

Riffyou.com recently caught up with Ben Rispin to learn more about how RULES came to be, as well as the band’s debut EP, You Decide. And not to worry, you can exclusively stream the soon-to-be-released EP (April 1) below this Q+A!

RY: RULES debuted live near the end of 2014. Why is now the right time for this EP to come out?

Ben: “Well, there wasn’t really a strategy to this. After I was done playing in Saint Alvia, I really had no interest in being in a band environment ever again. I got together with Chuck, Adam and Alex on a whim and we jammed, made a few songs and we thought we should record these one day. Then producer Simon Head reached out and asked if we’d be interested in tracking with him after we posted a phone video online. I said yes, although I wasn’t reeally finished writing the lyrics. So the dudes banged out the music portion of this EP in a few takes. No drum edits, just one big 14 minute track with four songs and musical interludes. We later did a few guitar punches with Steve Haine’s from here in Hamilton, and eventually, maybe a year later, I finished writing the lyrics, which I did with Steve as well. So really, my lazy, non committal ass is the reason this took so long. The other guys also have other projects, so we don’t get to rehearse often, or ever really.

“So, I was working ideas out on stage but I think we’ve only played like four or five shows or something? So the short answer would be that this thing is finally done and we’re going to release it now because we feel like it and we’re able to. You’ll be able to buy it on Simon’s digital label online, and eventually through Curt Murder Fan Club, a cassette only label from London, Ontario run by the dudes in Wasted Potential and Snacks!. We didn’t really shop this around because the thought of that makes me nauseous. Even thinking about it spikes my anxiety.”

RY: The four of you have been friends/collaborators for years already, How does that help speed up the process of a band gelling in terms of writing, recording and performing?

Ben: “Well, all those guys are fantastic at what they do so getting tight isn’t too tough. I’m still an annoying dick when it comes to song arrangement. There’s a controlling part of me – that I don’t like – which keeps me from being in bands full time. So, that doesn’t help expedite anything. But, I know Adam appreciates my dick-ness because he told me so when we were drunk. And people are always more honest when they’re drunk, right?”

RY: As you know, with an EP you don’t have much time to make an impression. With that in mind, what type of impression did you want to make with this recording?

Ben: “You know, I haven’t really thought about it. I can’t speak for the other guys, but for me, I guess this is one for people who enjoyed my old band The Video Dead. It’s definitely not the same as TVD, but it’s more in line with that band than any other previous project I’ve been involved with. It feels good to yell and scream again.”

RY: What is it about aggressive music that gets you excited?

Ben: “Well, I think because it’s the ultimate stress reliever for me. Yelling my dick off with the fellas is the best way I know to pull me out of a shitty mood. Plus, it’s what I grew up on, it’s what I always wanted to do with music before I got side tracked. It’s nice to not have to give a fuck. I’m really enjoying this.”

RY: Lyrically, what are hoping to get across with RULES?

Ben: “Ah, we have our stances on this and that. I really hope people don’t take things too seriously. A couple songs I wrote while I was in a bad, bad mood. Chuck often laughs at how mean they seem, but much like The Video Dead, it’s pretty tongue and cheek.”

RY: Why should RULES be a band that people embrace?

Ben: “Because we are all excellent at hugging. I’m kidding, I don’t really have a reason for that. Hopefully people will just think the band is sweet and we won’t need a reason.”

RY: Who in the audience are you wanting this EP to impact the most?

Ben: “I’d love to get babes for once, but in all likely hood we’ll probably attract the ‘Fat sweaty bald dudes in Dayglo Abortions T’s’ demographic.”

RY: What does the future hold for RULES?

Ben: “We’re putting this EP out, then playing support April 1st in Hamilton at Club Absinthe with my good friend Blake Prince, formerly of Straight Reads The Line’s new band Anniversary. It’s their album release party and it’s going to be a lot of fun. The Anniversary record rules and I suggest everyone get a copy.

“AND we’re playing Pre Pouzza at The Bovine Sex Club April 31st. Haha, so, touring pretty heavy on this one. We also keep saying we’re going to write more, but we’ll see I guess. For now, this is all I want on my plate as far as performing and creating music goes, but I wouldn’t want to do it with any other band. That’s for sure.”

Previous: Metallica Has Recorded “pretty much every show” They’ve Played
Next: Exclusive! About a Song: PUP Explain “If This Tour Doesn’t Kill You, I Will”