Tour Diary: The Penske File Do America (and Canada too!) Pt. 2

Travis Miles here from Burlington, ON-based band The Penske File. For those of you who don’t know, we play a folk-infused 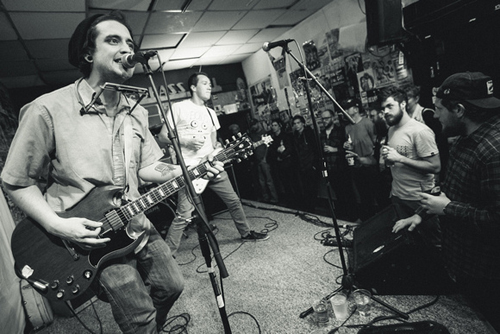 blend of melodic punk rock, and have recently embarked on our first (legitimate) American tour. I will be updating my firsthand accounts of our travels here at Riffyou.com through a series of blogs, photos, and run-on sentences. If that tickles your fancy, read on.

The rain was pelting on the van in a soothing rhythm as I awoke. Parked behind a student ghetto apartment complex in Kalamazoo, MI, I startled upward as Dallas — our tour manager — entered the van. Not 10 minutes later, we were on the road again.

It’s Monday, April 28, and the first week of our spring tour is behind us. In the four nights after my last update, we played in Flint, Grand Rapids, Fort Wayne, and Kalamazoo, MI.

In Flint, we played a bar called Soggy Bottom. Being our second time in town, we were welcomed with open arms into the home of our friend and the show’s promoter, Danny, where we cooked up a vegan pasta feast before heading to the show. The show itself was a lot of fun and some familiar faces came out to support. The next morning we woke up and headed to Grand Rapids…we could easily refer to this city as our American home away from home.

We pulled into town and were greeted by a sunny afternoon. We destroyed some Caribbean grub at a great spot called Chez Olga, headed to some friends of Dallas’, and drank porch beers and laughed feverishly until it was time for us to load in.

We played at a great punk rock bar – with a venue in the back – called Mulligans. The show itself was a pinnacle experience for me

as the room was packed with eager faces…some familiar, but most of them new. The former of which were crashing the stage front and singing words back at us at the top of their lungs — something totally unexpected and humbling. We shared the stage that night with four great acts: Three Cents Short, Tonia Bug, Squints, and The Campanellis. After the show, we returned the house and kept the party rolling far too late and void of any regrets.

The next day, Saturday, April 26, we played at a great dive bar in Fort Wayne called the Brass Rail. The show was awesome, and we felt right at home straight through the night. After closing down the bar at 3am. we drove out to the sticks where we stayed at the co-promoter’s parents’ house, had a good ole bonfire, and played acoustic guitars until the sun rose. We slept for no more than a couple hours that night and headed into Kalamazoo, where we were greeted by a couple of the dudes in the sweet band that set up the show that night, Bike Tuff. For a Sunday, the show was great and we made a lot of sweet friends.

Now we are edging westward towards Madison, WI. The rain hasn’t let up, and the conversation in the van has started to die. For now I will slink down, stretch out horizontally, watch the trees roll by, and wait for what the next week has to bring.

Previous: The Friday 5: Five Punk Rock Questions with The Hanson Brothers
Next: Getting to Know: Denmark Deathcore act, From the Bottom We Rise