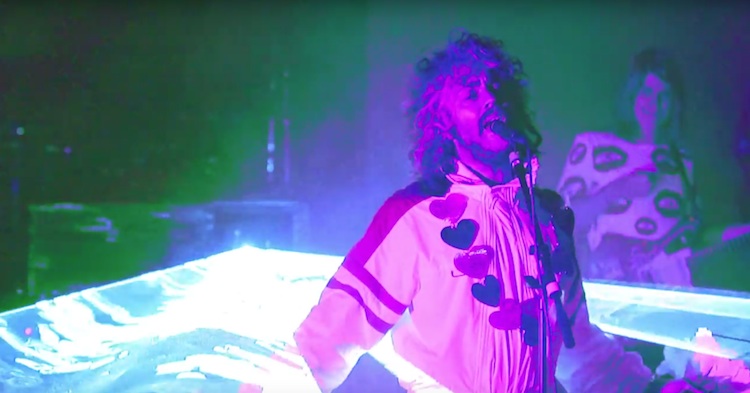 If anyone has ever listened to The Flaming Lips or seen them in concert, it’s easy to grasp the influence David Bowie has had on the band. They exclusively perform over-the-top theatrical stage shows, have an emphasis on eye-popping wardrobes and lighting, and refuse to make music with a don’t-colour-outside-of-the-lines mentality – if that’s not taking Bowie’s influence and running with it, we don’t know what is.

In the latest tribute to Bowie, The Flaming Lips have released a mesmerizing take on “Space Oddity,” along with an accompanying video filmed at the Crestwood Vineyard Church in Oklahoma City. The clip features The Flaming Lips performing in that venue to a collection of balloons attached to the pews, as a pair of nuns get, ahem, freakier by the moment. And, let’s not forget the wicked psychadelia that quickly enters the fray.

Not all Bowie covers feel magical, but this one certainly does. Kudos to The Flaming Lips for thoroughly capturing the spirit of the Thin White Duke, without forgetting what makes them great as well.

Without any further adieu…

Previous: Don’t (Physically) Kick a Fan Off the Stage, Asshole
Next: Listen to “Locked Away,” a Glorious, Yet Previously Unreleased Ryan Adams Song