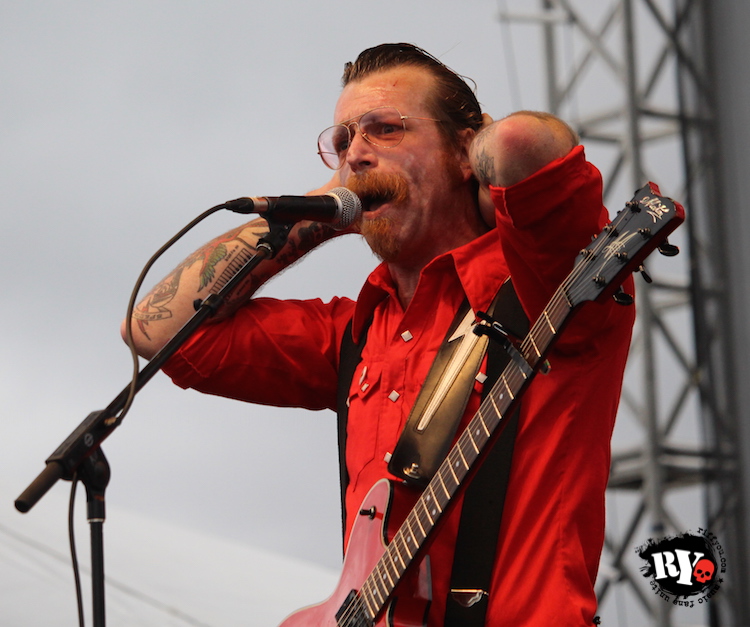 After making a triumphant return to Europe in 2016 following the tragedy that befell the Eagles of Death Metal show at Paris’ The Bataclan in November, the band have been forced to cancel the remaining dates of its current trek overseas.

“Eagles of Death Metal has regrettably been forced to cancel the remainder of their European tour due to founder Jesse Hughes tearing a tendon in his finger,” reads a statement issued by the band. “Hughes has tried to play through the injury during the current tour, but doctors have advised that the only way to properly heal it is to stop playing now, or risk further injury and having to cancel several weeks worth of shows.”

Added Hughes: “I’m devastated that we cannot continue what has been a life-changing return to Europe, but I need to get repaired so we can continue to play rock music around this beautiful world, including coming back to Europe even stronger in the summer.”

Before returning to Europe this summer, Eagles of Death Metal will tour Canada with Death From Above 1979.

In Riffyou.com’s 2015 interview with Eagles of Death Metal, Hughes discussed his musical bond with bandmate and friend Josh Homme.

“We challenge each other in different ways. I write music that makes Joshua laugh,” offered Hughes. “It’s easier to write for a small audience when your small audience is great. I’ll bring back shit and he’ll say, ‘You fucker, I was going to steal that.’ We are trying to complement one another. That’s really the way it’s supposed to be. We both have similar voices. I always try to complement what he does. If I say, ‘Dude, this needs a guitar…’ I turn around and he already has the guitar. Honestly, there are songs where we are coming up with parts where we haven’t said a word, except for, ‘I know, I know, I know.’ That unspoken communication doesn’t come without the unique frequency between us.”

Previous: Jack White to Appear on Season Finale of “The Muppets”
Next: Riff Pics: The Dirty Nil @ This Ain’t Hollywood, Hamilton