Warning: A non-numeric value encountered in /home/riffyo5/public_html/wp-content/plugins/color-scheme-every-theme/classes/Options.class.php on line 108
 Has Brian Johnson Been Stiff-Kicked Out of AC/DC? - Riffyou.com

Has Brian Johnson Been Stiff-Kicked Out of AC/DC? 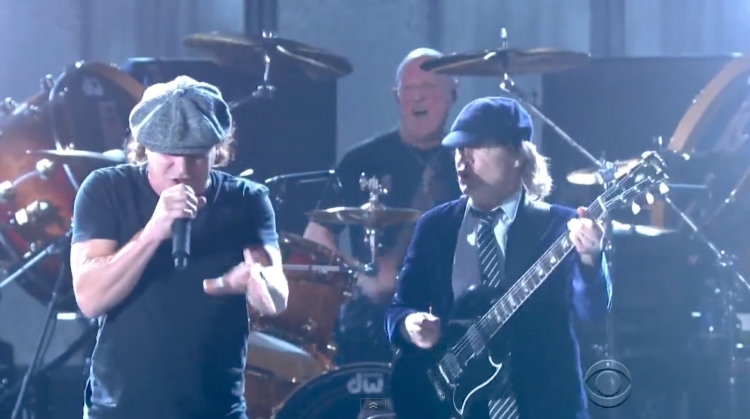 Last week, it was revealed that AC/DC was postponing their remaining North American tour dates as a result of Brian Johnson’s hearing issues. It was also hinted that the band would be interested in rescheduling those shows with a replacement vocalist (Maybe Pelle from The Hives?) However, according to comedian and friend of Johnson, Jim Breuer, it’s being suggested that the singer has been unceremoniously tossed from AC/DC.

During a recent edition of Breuer’s The Metal in Me podcast, he spoke about his encounter with Johnson following a comedy show on March 11 – just days after the aforementioned AC/DC announcement.

According to Breuer, Johnson’s doctor informed the singer that he had lost some hearing during the first leg of the Rock or Bust tour and advised him against performing further shows.

Commented Breuer: “[The doctor said], ‘Now you’re gonna go out and do indoor [shows]? I do not put my name on this. You’re a grown man. You make a decision, but I would not mess around with this at all.'”

Shortly after speaking with his doctor, Johnson reportedly informed AC/DC management and guitarist Angus Young about his doctor’s opinion.

“[Brian] said that he called and let [AC/DC and Young] know, ‘Hey, this is what the doctor said, but let’s try to figure this out. I don’t think it’s as bad as he said it is,'” added Breuer. “Literally the next day in the press, it was ‘Brian Johnson, tour canceled, he’s losing his hearing.’

“He said he just called and gave that information,” Breuer said. “He didn’t say he wanted to quit. He didn’t say he was done. He called with that information, and two days later, he read in the papers and heard on Twitter and everywhere else, ‘Brian Johnson going deaf canceling tour.’ A day later, and it was, ‘Oh, we’re gonna have guest singers.'”

Even more troubling for Johnson, offered Breuer, is that he already feels as if AC/DC has replaced him.

“There’s been no answer [from the band],” said Breuer. “[Brian] feels like he heard from someone that they already hired somebody, it just hasn’t been announced yet.”

He continued: “[Brian] explained how Angus is the youngest guy in the band. He’s convinced Angus wants to continue the next ten years whether it’s him or not. [Angus] wants to write another album and do one more tour. Who’s filling those shoes? How do you do that after forty years? It’s just really weird.”

UPDATE: Jim Breuer has attempted clarify his comments on Facebook after this story starting spreading across the web: “I have seen some stories circulating about my podcast. As a friend, I saw Brian withdrawn for the first time in my life. He’s not a quitter, he seemed hurt by the situation of being between a rock and a hard place. I spoke as a true fan and friend, simply venting as if he was a brother of mine. I hope to see him rock out one more time. You have to remember I’m a comedian & a storyteller. I definitely exaggerate and sometimes I get a little carried away!! And this was one of those times!”

Previous: Pearl Jam Wants to Save Your Hearing – Why Don’t Other Bands?
Next: Ottawa Music Shop Clashes with Record Store Day