For over 10 years now, Cancer Bats have been one Canada’s most continuously relentless metal/hardcore 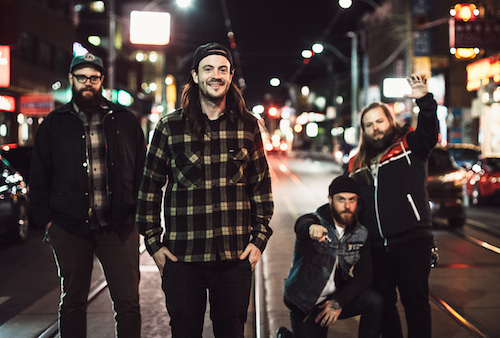 bands. Their sound is tough and powerful, the sonic equivalent of a baseball bat smack to the skull.

With four albums and the deaths of young friends not too far in the rearview, Cancer Bats approached album number five, Searching for Zero, with a greater appreciation for what the band is capable of and an understanding that this is worth dedicating life to.

However, that’s not to say that complacency emerged as the band’s warm blanket when it came time to make the album. Instead, Cancer Bats took a calculated risk and sought out the production talents of Ross Robinson, someone who has a history of bringing heavy bands to new levels of heaviness. His resume is long, featuring the likes of Slipknot, Korn, Glassjaw, The Blood Brothers and Fear Factory.

“There is so much folklore about [Robinson] and what he does to bands,” offers Cancer Bats vocalist Liam Cormier during an interview with Riffyou.com. “We had people tell us before we left that we were brave to go and do this…because he makes bands cry. [From my experience] he will break things down to the raw emotion you’re trying to capture in a song. So if that song is intentionally about something insane that bring someone to tears, then that’s where he is going to take you. Otherwise, he thinks, ‘why would you even play that song?’”

During the three weeks Cancer Bats spent with Robinson, Cormier recalls being pushed vocally on a continual basis. Robinson would ensure Cormier that he wouldn’t blow his voice out and that the best thing the vocalist could do was trust the producer’s methods. Robinson’s confidence, explains Cormier, was infectious and reassuring.

When you blast through Searching for Zero, you begin to understand what Cormier experienced. His voice sounds scarily connected to the emotions being conveyed, all the while not a toe’s distance from falling off the cliff toward disaster. It feels like the most controlled that chaos can get.

“You always want to outdo yourself and that’s the case for everyone in the band,” says Cormier. “There were a lot of ideas that I had premeditated and tried on demos. When I listen to those versus the final version of the album, I think about how far Ross was able to push me vocally…it was beyond what I thought I could do. His jam is to figure out how to tape into you emotionally and physically, so that you just [nail your parts.]”

He continues: “I think he shook us up. We thought we knew the parameters of our band and how we sounded. But then you have Ross and he’d say ‘fuck that, this song is punk, let’s make it super punk.’ It was really fun to have someone who was less interested in what Cancer Bats was, and more interested in what would make a single song crazy.”

For Cormier, this album is a “mile marker” for Cancer Bats. It’s the new side of a band in which he feels is now at its best.”

“I am so stoked with how things turned out,” relays Cormier with much enthusiasm. “Not only do I think this is the best record we’ve done, but I also feel that there’s no way we could’ve written and recorded this record had we not done the other four to build up to this. That is rad, because you don’t know many hardcore bands that make it to album five. I definitely didn’t expect us to put out five records. The fact that we’ve gotten here is insane.”