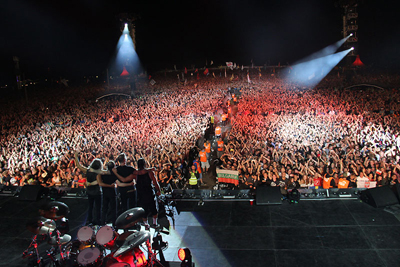 After announcing the take home release date of their IMAX film, Through the Never, Metallica has revealed that they are back at work on a new album, but plan on breaking from the recording process next summer for two short European tours. Best part? Those who buy tickets can have a say in what the band plays!

Metallica explains that they generally perform 18 songs a night and that European concert attendees will be able select 17 per night, leaving one slot open for a new song of the band’s.

Once a person purchases his tickets online, he’ll receive an email with a code and a link to site where a song request ballot can be cast. Metallica says that fans can choose from the nearly 140 songs that the band has recorded, and that the website will allow fans to keep up to speed with the voting results.

Thus far, three June 2014 concerts in Germany have been booked, with more European stops to be announced. Metallica advises fans to check back next week for further updates.

I know I’m Canadian and my vote doesn’t count, but how does this look for a setlist? What would yours be?

“For Whom the Bell Tolls”
“Seek & Destroy”
“Battery”
“Creeping Death”
“[NEW SONG]”
“That Was Just Your Life”
“Master of Puppets”
“One”
“Fuel”
“St. Anger”
“King Nothing”
“Nothing Else Matters”
“Wherever I May Roam”
“Until it Sleeps”
“Sad but True”
“Turn the Page”
“Fade to Black”
“Enter Sandman”

Previous: Industry Interview: When You are Young Heart Music
Next: Fan Review: Diemonds Back to Raging on Home Turf